in the interest of full disclosure 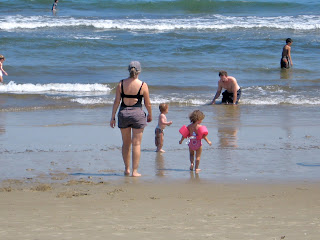 I assiduously avoided this one like the plague when posting beach pics the other day.  That woman in the wide brown shorts?  She is not someone I recognize as myself.  See that lovely roll of mid back flab?  Never existed before recently.
I was the proverbal 95 pound weakling for most of my life. Then I met Honey, after birthing two kids and weighing in around 104 on average, and got very comfy cozy with him settling in around 110. We got married  at 40, had another kid at 42, while going through mucho bad pregnancies in order to do so. Now at 44, I'm closer to the 130 mark.
I'm a small framed 5' 2".  I really don't want to lug around a toddler's worth of weight without the toddler on my hip.  I don't expect or want to weigh under 100 ever again, but after all I've been through in the health department in the past couple of years or so, I think I can finally get myself back to a more toned state, and at least a decant and a half below the current flab and fat.
I have joint issues, so running is out.  I can barely do squats. I had a hard time with that when I was skinny, after all my dance years as a kid, my knees are wrecked.  I have back issues going way back.
But when Honey and I met, I was doing an old reliable yoga tape at least three times a week.  That fell off within a couple of years.  I have trotted it back out now and then, but never for long.
Yesterday, I dug it back out, popped it into the VHS (I'm so old school) and Toots and I did the twenty minutes.  It was rough.  My balance was way off, I had no center.  The ankle was tweaking but I saw it through to the end.  I tried to be gentle with myself, too.
Toots was in for the first ten and very enthusiastic, until she decided that running around the house yelling "AAAAHHHHH!" (a recent favorite activity) and then pouncing on my yoga moves was a better idea.
Next month preschool, two days a week.  I will yoga and write on those days, definitely, sans Toots's interruptions.
In the meantime, I'm going to try to commit to yoga at least twice a week, regardless of pouncing two year old.
Because, and I hate to paraphrase the currently overused saying: you can't take care of others unless you take care of yourself first.  I am really feeling that lately.