end of the season

This year, the gardens were a lot of work for not much produce or beauty.

July was basically like living in the Sahara - sustained state of well over 100 degrees and no rain. And there was the ankle in June, which still makes gardening a challenge, though it is significantly improved from then.

August didn't improve much. And by then, it was too late:  if the gardens grew at all, I wasn't going to be getting much from them.  Tomato plants started off really well, but a rabbit got in the fence. Between the rabbit and the temperature, they never recovered.

I got some mini bitter broccoli, and a green pepper or two early on, but nothing since.  Only a few snap peas early in the season.  Never saw but a couple of microscopic spinach leaves, but the lettuce did alright early on.  Cucumber and zucchini were my best crop, but they were decimated quickly once again by the nasty evil squash bugs, no matter how I battled them.

Right now, I am still picking the occasional okra pod and frying it up in a pan with cornmeal batter, the way my mom and grandmothers did  - minus the bacon grease from the coffee can under the sink - I use peanut oil instead.  Everyone looks forward to it, but it's rather like the Donner party's enjoyment of their last food parcels before they moved onto desperate measures. We each get one, maybe two bites.  It's a tease.  A horrible tease of southern fried okra deliciosity. And I never had enough pods at one time to make my Jambalaya.

Dang this July.  Dang this southern heat and drought.  I could never water enough without burning plants in the process.  Even my flowers out front were skimpy this year, and most of the bushes died or half died.  The proud gladioli were droopy and fell over if they bloomed at all from their blade leaves. I trimmed every dead bush part back, dug a lot up, and am hoping for a resurrection next spring.  My rose bushes look pathetic. I cut my rose vines all the way back and reset a new trellis for them to cover by next spring, and they are starting already.  No matter what, that tangle of rose insanity always does well.

This weekend, Honey moved the brick border into the front garden plot by about two feet from its original position.  My wonky back couldn't manage it though I tried. I transplanted marigolds out front. They were serving as border patrol around the cukes and zukes out back  against the squash bugs, to no avail.  So there are now a couple of bright spots of yellow and orange as well as the weird, I call them fire lilies, in the header pic above.

So here's a last toast to this summer's struggles: 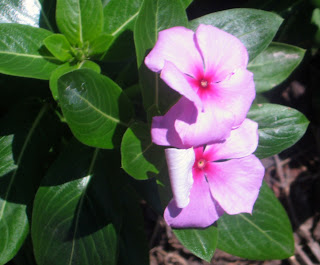 I still don't have any idea what this is, but they come up every year. Very sparse this year. If you know what they are, please let me know! 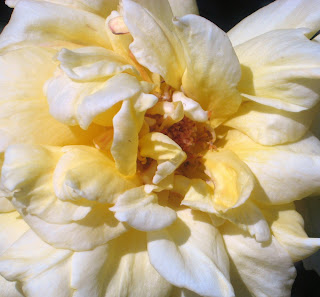 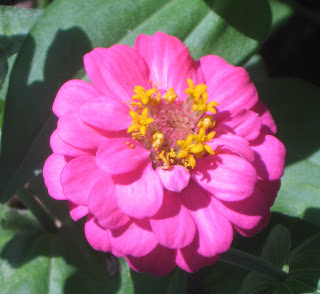 Zinnia never fails, but they were few this year, and only one hue. 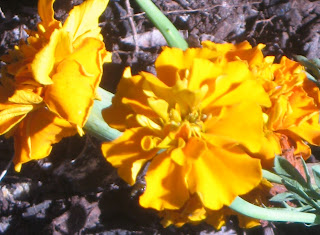 How did your garden do this year?
Posted by cath c at 7:52 AM