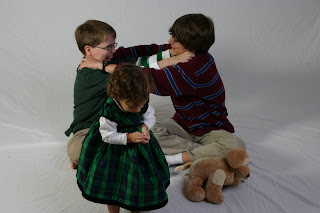 At the end of a far too busy overscheduled weekend, we attempted to take our Christmas card portrait. Honey set up his studio equipment in the livingroom. Baby C hated her dress and screamed and cried and pulled at it. K was fittingly teen angsty, barely tolerant at the prospect, and S was in rare form. Aspies can be very exaggerated and funny or crazy looking or deadpan in photos that aren't candid.
Here, C was still screaming, occupied with a cookie and wandering, K & S were starting to snipe because enough with the screaming baby already. I had the brilliant idea to tell them to pretend to strangle each other. Honey wouldn't let me use this for the card, though. Shucks. Both boys are really smiling in this one.
Near the end of the shoot, we did finally get a good shot of all of us, except my mother-in-law, who politedly declined to partake in the mayhem. We just need to fiddle with the light and cropping in Photoshop, then have the cards made.
Posted by cath c at 8:54 AM