Visitor that came to stay

Warning: If you do not like creepy crawlies, move away from this blog! If you do not, I am not to be held responsible for the anxiety issues this may induce, up to and including PTSD - post traumatic spider disorder.

Last week we discovered a very interesting visitor on the house, near the grill, building her home between the house and the playset. It's a big home - seems like it could serve as a condominium complex. 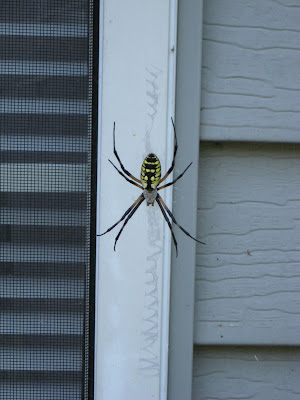 She definitely instilled fear in my husband and my younger son, who ran into the house, slammed the slider, yelling "WHOA!" He braced himself against the glass and panted, bug-eyed as if we had been invaded by aliens. Come to think of it, he would have preferred to have been invaded by aliens. He's been making preparations for that. My mother-in-law has not used the back door since the spider's appearance. Her fear is much more subtle.

My eldest son, my little daughter and I, however, have been fascinated to no end ever since her arrival. Kids after my own heart. My dad still speaks in awe of my spider collecting youth, how of all of his kids, it was the girl who collected spiders and bugs. So we watch from inside the dining room window. She doesn't do much by day. She's a third shifter.

Well, big as she is, about 3.5 inches in length, and with such distinct markings, she was easy to google. I found out she was largely non-poisonous, unlike the black widow spiders I found in my garden last year. She's good for the garden, a common black and yellow garden spider. She has a big bite that can hurt, but for the most part, it won't do further damage. Unless you have an auto-immune disorder, then the minimal venom could kill you, or at least be very painful. Here she is in close-up, demonstrating her very creepy skull-like alien head markings: 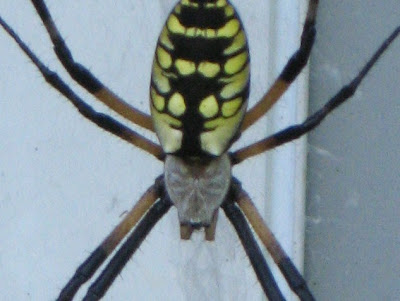 I must admit to a little shudder when I zoomed. I think it was more about the unshaven legs look, though. I emailed a friend, whose brother-in-law is an entomologist, and she said it was an Argiope aurantia. I just love Latinate terms.
Well, she's still here, and she doesn't seem to be interested in going anywhere else. As long as she doesn't decide to start eating us out of house and home, like some other guests, she's welcome, by my standards. I can't say the same for certain family members. You can read that any way you want - invading family members or ones who live here and aren't as enthused about her as I am. HA!
Although, after reading up a bit, I found out she could lay between 400 - 1500 eggs. I'm not so sure I'll feel so confident when or if they hatch.
But oh, the tale I'll weave....I know. I couldn't resist.
Posted by cath c at 3:00 AM