such a big girl and scary stuff on the horizon

Baby C is growing so fast and seems to want to be growing up even faster. Here she is trying to fill my shoes and use her toy cellphone as a little adult. I know everyone who has ever had a toddler and a camera has a variation on this shot, but I'm feeling particularly heartstrung about it today. 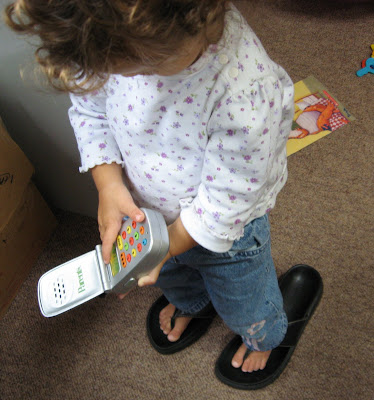 I wasn't sure I wanted to blog about this as I try to keep things on the positive here, but it's what is on the forefront of my mind to the near exclusion of all else from school photos coming up to excitement over K's new bass lessons and S coming up on another belt test for Taekwando. And I just realized I didn't even mention working on edits to my manuscript in that sentence on my re-read before posting.

I've been heading to doctors about a few things about my health, after a bit of a medical hiatus since having Baby C. The truth of the matter is that I didn't want to know what it would mean, or believe that it was as scary as my instincts were telling me. I have not been healing well since having her seventeen months ago, I am exhausted and achy all the time and I don't think I can just put it down to having a baby at the age of forty-two after an entire pregnancy of bedrest and sleep deprivation from her continued night wakings. turns out I just at the beginning of what looks to be a diagnostic process at the end of which will entail multiple surgeries. I won't go into details, but suffice to say, female stuff among them.

I am extremely grateful that what I am going through is not anything along the lines of terminal cancer, but it's still going to be a long road, when I am already exhausted from the road I have been on. But if at the end of it, I can feel bodily closer to my mental age, and therefore further meet in the middle at my chronological age, it will be worth it. Because right now, I am walking, or rather sitting through the world like an eighty year old, and at this juncture in my life, with a toddler, asperger preteen and now a high schooler, feeling like I am eighty years old physically is unacceptable.

At the dinner table the other night, I told S about what is coming on the horizon and why. I tried to make it simple and like it's a good thing, but his expression and conversation after said it all. His big blues widened into worry of the extraordinary kind and he said, "But what if you don't wake up? Then I won't have a mother." Then he turned to Honey and added, "Until you give me a new one."

He sounds a little funny and callous, but to me, it meant that going the childhood of blended families that he has gone through, he's pretty resilient, despite his initial appearances. I may sometimes think he needs my constant protection and will probably have to live with us the rest of his life, but other days, I can see, given the right circumstances, this kid is going to be alright. He definitely has an angel or something watching over him.

He was onto something, though, about not waking up. I am scared of that myself, as my mother, both of my sons and I have gone under for procedures and have had a rough time with anesthesia and with coming back out of it. So that is part of my concern when the surgeries come around. I also know, that when K was a toddler, I promised him I would live forever, or at least as long as the kids all need me. My determination to fullfill that promise is stronger than anything.

Thank you for listening, and I know I will be alright. A friend pointed out to me the other day, 'Cath, it's worth it. You'll take thirty years or more off your physicality that shouldn't be there anyway. Having these surgeries will free you." So forward I march on to the rheumatologist next. Wish me luck, and please keep us in your thoughts and prayers.
Posted by cath c at 5:45 AM