Yesterday, K was up and out in the rain for the bus at 6:35am for his first day of high school. I managed to give him a big hug before he went out the door on this momentous occasion.


S was up and at 'em and even made his own lunch, waiting by the door over thirty minutes before the bus was due. I asked if he was excited, and he replied, "well, sort of...." which amounts to a bevy of mixed feelings about yes, he's excited; no he wants summer to last forever; yes, he's happy he'll see his friends and is happy to learn; but doesn't want to do the work; and he's anxious about new teachers and aides; but happy he'll see his old teacher in his smaller class for much of the day.
This year, he will be mainstreamed for three academics as well as his Encore (art, music, gym,etc.) classes. This is a big change. He's almost all the way back fully mainstreamed for the first time since we moved to Virginia three and a half years ago.
But back to the morning, waiting inside for the bus because of the rain. Ready way before he needed to be. 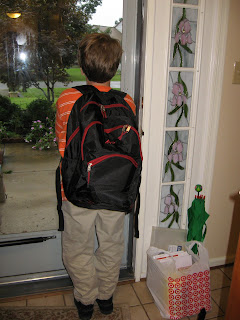 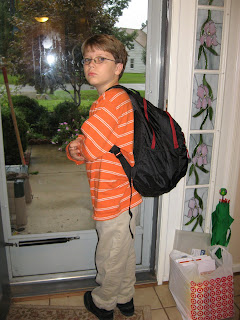 Being a student is very serious business. Fifth grade is a very big deal. 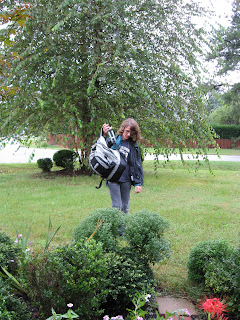 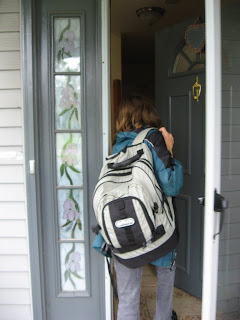 K came off the bus at the end of his day, saying "No way! You are not taking my picture" as he moved his backpack around for a block.
And then, "MO-om. Seriously."
I maintain that this one is training for work in covert operations.
They both had good first days. C ran around periodically calling her versions of their names, looking for someone more entertaining than I to play with. Her little voice echoed through the empty house...well, not really, but you get the idea.
Posted by cath c at 3:00 AM