A good morning and then...

Most of our holiday weekend was spent running around finishing school shopping and sundry errands, and housework. Of course all while the weather was beautiful and taunting us to run to the beach.

Labor day got off to a fun start:


C loves when S bounces her on the trampoline. 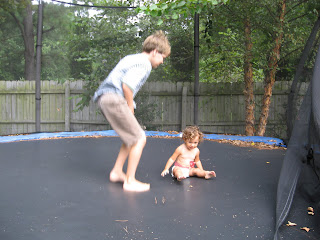 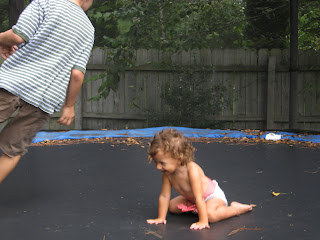 Then it was C's turn to bounce S. 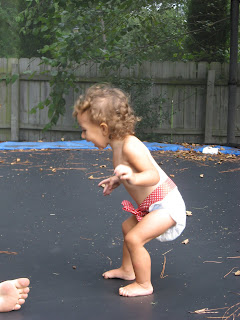 They took multiple turns and she loved every minute of it - even this one. 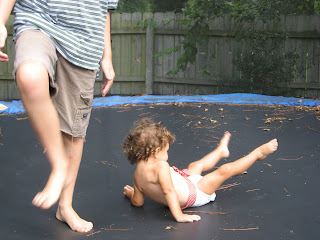 As for the ribbon and diaper look, a girl's gotta accessorize.
All of the above happened before I finished my first cup of coffee. That says a lot. I got the camera out and was able to take halfway decent action shots on half my usual caffeine intake to wake up.
And then beach plans to try out a new beach a bit of a drive away devolved with rain and tantrums by a teen and a preteen who thought their mother and stepfather were insane for wanting to go to the beach in the rain. But it was the Last Day of Summer before School Starts, so we were going to have an Adventure regardless of the rain.
And then the bag of peanut butter and jelly sandwiches was thrown at Mom, and screaming would not stop for anything by two young men with huge attitudes. So after we made it as far as the nearest gas station, and Led Zeppelin's The Rain Song dropped a further hint along with the increasing downpour, we reversed our trajectory.
Then the screaming commenced to sound like this: What?! Nooo-o-ooo!!!!! Hey, this isn't the way to the beach! This is the way home! Why aren't we going to the beach! Turn this car around NOW!
So I made them clean their rooms instead. So there. Last Day of Summer.
I hope you had as much fun as our early morning on your Labor Day. Forget the rest of it. Although, it is pretty funny to look back on it. And the boys' rooms are clean. Well, cleaner than they were.