Then the women entered following the men, led by the elder woman and moving along down to mothers and young children. 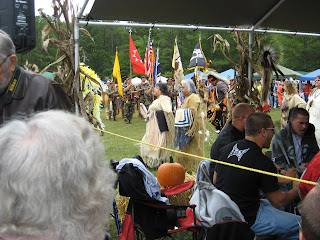 These elder woman were full of grace and dignity. Part of the day's festivities was naming the annual Chickahominy princesses, from little girl to Junior to the reigning Miss Chickahominy. The Junior Miss Chicahominy was escorted out by her grandmother who was crowned on the same day fifty years prior. The little girl was escorted by her grandfather, the Chief. The sense of a generational continuity ran throughout all the ceremonies. The girls were crowned because of their winning essays which emphasized the importance of education in Tribal Nations. The emcee and the Chief both spoke on different occasions about the respect for woman in the tribe, not only as the caretakers, but as council women and fellow veterans and warriors. For much of the ceremonies we were asked not to photograph, and honestly, I wasn't there to gawk, so after the opening ceremonies, I stopped anyway, but I did love seeing all of these Peoples honoring their Traditions - in their regalia - traditions older and more conscientious than any in my own family.

A large reason why Powwows are so moving to me is in the stories of the Tribes is part of my own family history, largely lost. My family assimilated in order to ease burdens at a volatile time in US-Indian Affairs history. I have searched records, and found that the great-grandmother who we all know was full Cherokee was claimed white in the marriage record and census records of the time. The oral story passed down from generations was that my white great-grandfather hired an Indian woman to care for his three children when his first wife died, possibly in childbirth. They eventually married and my grandfather and his twin were born to her. Aspects of my Cherokee family seem passed down in my father, my brothers and my love of nature and good craftsmanship, and in my grandfather, uncle and my love of horses, though I've never ridden more than a handful of times. But no culture is consciously passed down, just the mysteries and my desire to solve them. There is even less known on my mother's side, but apparently, there is Cherokee traceable to a generation further back on her side. My parents realized at one point that they can trace some of their geneological history to the same area of North Carolina, near the Eastern Band Nation. 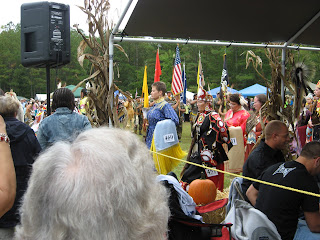 I am full of conjecture at this point, but the tall woman in a blue with yellow pioneer looking dress is in a Traditional regalia of cotton weavers indigenous to the Southeast. A long time ago, when I was more thoroughly involved in research, I saw Cherokee represented in these cotton dresses. So even if I'm wrong, which I admit is highly likely, I recall seeing something about this type of dress being common among Cherokee. So I fantasized a bit that this woman represented me and my prior generations. 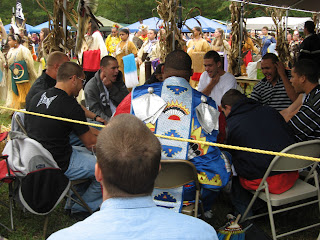 This drum circle was one of four that traded off chanting and drumming throughout the ceremonies. See how they are drumming with one hand and using the other to grab around their throats? Their chanting reminded me of the middle eastern female ululation singers, very haunting and moving, especially with the powerful strokes of rhythm beaten out on the drum. I was moved to tears between the live sacred music, the pride and skill of the dancers and in listening to the history of this tribe and how they honored other tribes and even American settlers history in their festival. 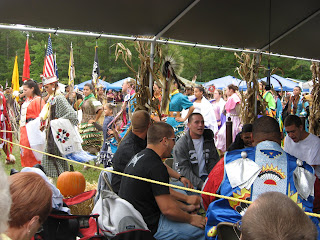 Unfortunately this is the best shot I could get of these two young women dancers. The bright blue dress (behind the drummer in the grey hoodie) has silver jingling pieces, and the green dress (third in from the left border of the photo) has gold. Every move they made added to the music. I once had a silver Hindu type anklet that jangled, but it had nothing on these skirts, which were beautifully handcrafted, too. I wish I knew how to insert arrows or had gotten a better photo. All of the photos from yesterday's post and today's are from the Grand Procession opening ceremony.


This photo is o 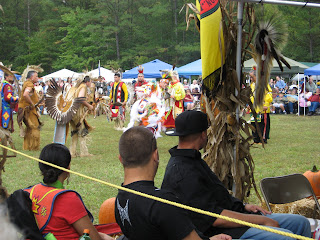 f the Welcoming Dance traditional to the Chickahominy. Remember the young male dancer in beautiful white regalia from yesterday's post? That's him dancing between two rows of the the Chickahominy Elder dancers. In ages past, when a guest visited from another tribe, they were required to dance a long Welcome Dance to show that they were coming in trust and meant only good intentions for the Chicahominy. The Chief indicated that this dance would go on for hours or even days, to ensure that the guest had no ill will or ulterior motives toward their people. He was an incredibly energetic and skilled dancer. I can't imagine what it's like to dance full out like he did in all that heavy regalia. Later in the festival, he presented his nephews in the tradition as their mentor to follow him in dance. All of the chicken and grass dancers were invited out to join the young boys and their uncle, who even at about five and seven years old, it was possible to see how seriously they the took their duties in taking on this particular representation of their family, their uncle's traditional skill and their taking the mantle of it to bring it forward for their own Nation as well as to represent all Tribal Nations. He thanked the Chicahominy for hosting their presentation as their host Powwow.
My experience on Saturday of how seriously the Native Peoples take all of their rituals, traditions and skills was something that made me think more deeply about the ways in which I relate my family history to my children and how they respond to the concept of respect, which is to say, in a modern sense. I seem to have instilled in them a certain level of respect for elders . I have always told family stories, and been as conscientious as I can be about family history and where the variety of people in our family tree come from. I think I will try to impress upon them even moreso, even though we've lived somewhat nomadicly, that a sense of place is very much a strong part of who anyone is. And that who we are is somewhat what I witnessed on Saturday. Next year, I will definitely take the whole family.