He had waited very patiently for this, as I forstalled last Monday because he behaved in a very undisciplined manner during his class. I spoke with Master Ko about that, and he agreed that S did not deserve the privilege of testing for his belt after that behavior. S had been very distracted and distracting all the way through class. I believe all of us tend to cut him a lot more breaks than we would another kid for the same thing. But sometimes, even a child with asperger's needs to know when he's taking it too far. Asperger's is not an excuse for bad behavior. If he is going to get along in the world later, working at a job, he's going to have to control his impulses to some extent. Self-discipline is a big part of his Taekwando experience and why we have him enrolled in the class.


But back to the 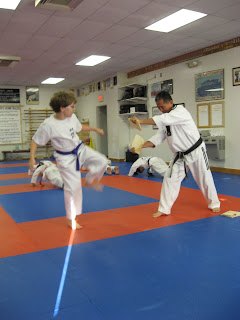 And here he demonstrates his side kick power.


When I see S among his peers practicing his forms, doing callesthenics and stretching, he looks sloppy, slow and stiff. Everyone notices. I often hear chuckles from the parent bench, some of which are my own. But the fact of the matter is that he learns his routines quickly, and is always eager to do the next thing, especially if Master Ko is teaching him rather than one of the other instructors. Then his form sharpens up, his moves are crisp, his posture indicates the inherent power of the moves, and his Qia is strong.

A few year ago, Honey and I rented a movie of Tony Jaa's called Ong Bak. In it, you see the development of an unlikely fighter in Muy Thai. Of course there is much more to the story. It's a good movie, I recommend it even if you're not a big martial arts movie fan, though it is brutal. One thing that S reminds me of is the Drunken Monkey style of fighting. He's not as aerial or springy as the style, but it's a style that looks like it wouldn't work if used in a real fight and also looks quite laughable. Yet it is one of the most effective for it's disarmingly distracting sensibility.

So I watch S, goofy and ineffectual as he seems during class where others are flexible, sharp, quick. I watch him and know that while he looks off-balance, he has the center of gravity of a wrestler. I watch his legs in their low and bent rather than high and straight kicks, and know, it may not look fancy, but those kicks have power. I watch his arms in their overly quick, sloppy, flailing movements and know that should he be attacked in a dark alley, he could take the guy out. Even with his slow reaction time.

I'm very proud of his accomplishments in Taekwando. I am very grateful that Master Ko, Honey I keep giving him the chance to prove everyone wrong about him. Because given half a chance in any endeavor, he usually proves he can do whatever it is better than most. He may be unconventional, but he's very effective.