This weekend was the annual Powwow of the Chickahominy Tribe. Their tribals lands are just about an hour northwest of here, on the way toward Richmond. 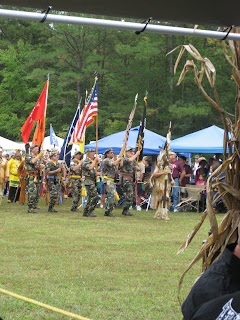 I had the honor of accompanying and driving an elder friend and friend of hers from church to the event. J has been going to this Powwow for many years. I'm so glad she ask me to drive. It was truly a pleasure getting to know her and her friend on the ride and I was rather blown away by the opening ceremonies of the festival. This first picture is of the initial entrance of the Grand Procession. I hope I have this correct, I believe the first person's name is Falling Water. He was the first to enter the sacred circle, carrying the Flag of All Tribal Nations staff. After him came war veteran Native Americans from the Chicahominy and a few other Tribes serving as colorguard for the US and their own Tribal Nations. Later there was a very moving tribute to all those who have served in the US military during war. They invited all the present veterans of foreign wars who were present, to join in the circle to be honored as the warriors, taking wounds of body, spirit and mind so that the rest of us may live in freedom. They also invited all the war mothers of soldiers lost and widows to be honored with the veterans. I found it particularly moving considering that the Chickahominy Tribe, our hosts for the event, are still fighting for federal recognition as an independent Tribal Nation. There are journals and records of the earliest settlers encountering the Chickahominy along with the Pohatans of Pocahantas fame. 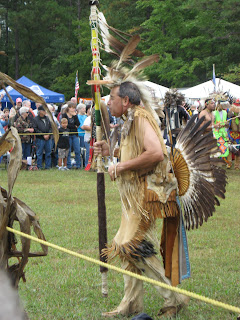 I really hope I have his name correct, as here is Falling Water leading the procession around the circle. 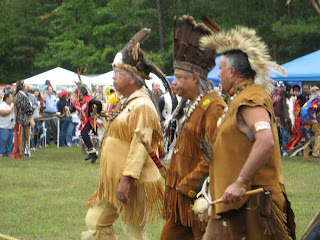 After the colorguard came Chief Steve Atkins and two Tribal elders. (I'm lousy with names, so if I am wrong again, please forgive me. Let's just say, my first few years in education were as a substitute teacher, learning way too many names, and I believe my mental file cabinet drawers for names are overflowing and incredibly disorganized.) Largely, Southeastern Woodland tribes were represented at this Powwow. But a few people came from farther out, representing with their full regalia. I wish at this point in my life that I knew more about the language of regalia, what facets and colors of headdress and costume represented what totems and tribes and aspects of the native spirit world. 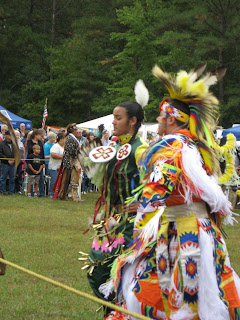 I was very curious about the man in black with the round feather headdress. I asked around and got a few different answers that didn't quite mesh with each other. If were not feeling shy on Saturday, I would have had better luck getting a straight answer as I would have asked the man wearing the unusual regalia. One answer was he may have been representing the Cherokee Stormbringer and another said he seemed to hail from the Great Lakes region by the round headdress. Some dancers follow the Powwow circuit all summer through fall and all over the country.


I have more pictures and things to say about them, but I'll wait till Part II to to get to just how much being at this event moved me. Too many interruptions to get through this posting in a single train of thought...