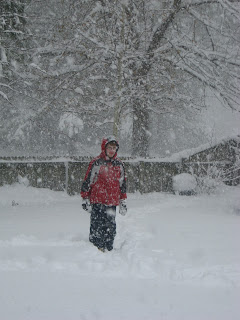 Predawn, of course. I do love that boy.
Christmas was a blur of a whirlwind. My parents were going to leave yesterday morning to head back to Connecticut from our little Southern Virginia corner, but Mother Nature had other plans. 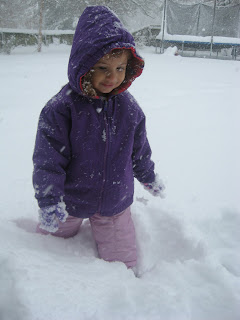 A little later in the day. 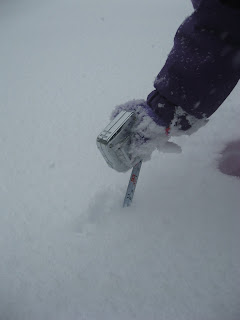 Toots lifted it out a little, it was actually at the red foot marker when I stuck the measuring tape in for her to hold steady. 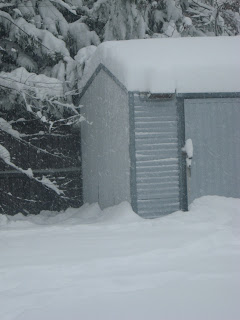 Our shed at the 15 inch mark on the roof.  We discovered that sometime in the past few years that we've lived here, the snow shovel was moved out to the shed from the garage. Because we never needed to use it on the driveway. I trekked across the yard to rake the snow from in front of the shed door to retrieve the snow shovel.  Something is wrong with that picture - I used the rake to dig snow to reach the snow shovel. 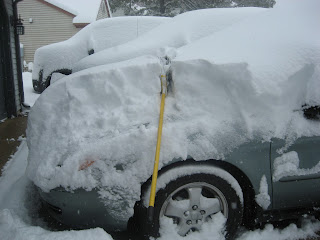 This is the beginnings of clearing off four cars. Snow is taller than the broom head. 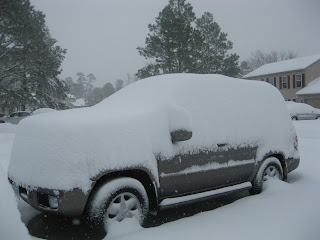 This is my parents' car yesterday afternoon.  Grounded. They are driving Mr. Cynic and Captain Comic to visit their father up North.  The boys were so disappointed to not leave.  But they head out shortly. Packing the car now. I know, I sent Honey out there.  Look, I started the driveway and car clearing yesterday and my fingers paid a hefty frostbite price because I do not have good weather gear anymore, because I live in the South. But I had fun, I love this stuff, even if my circulation doesn't.
That's right, I said it, I love shovelling out the cars. I may be alone in my joy, but it's mine.
So, yesterday afternoon and evening we played games and looked at old family pics my cousins posted on Facebook. My mother was cracking up at all the old memories. 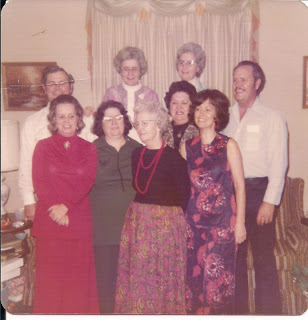 1974, My mom is the babe front row right in the serious navy and red print polyester, next to their mother, with all her siblings. ﻿Her brother behind her, and her sister in red to the left are the only ones still living besides the baby, my mom. That sweet little grandmother in the front next to mom gave birth to everyone else in that picture, starting with the twins in back.  She also rather raised quite a few of her 26 grandchildren.  She was da bomb. I miss them all.  Daily.  We sure had a lot of fun together at family gatherings coming up.  We lived the farthest away, so saw them maybe once or twice a year for about a week or two.  But boy, that was a crowded, boisterous house full of fun, food, love and family.
I walloped my mother and mother-in-law in Scrabble, and they conspired against me in Apples to Apples later.  They both usually kill me in Scrabble. It was payback.  But we had lots of fun. Even Honey and Papa played Apples to Apples, and Capt. Comic for as long as he lasted, which was pretty long for him.
~~~~~~~~~~~~~~~
Well, they are on the road now.  I forced a kiss on Capt. Comic's cheek while he sat in the car. "URGH!  You know when you kiss me, Mom, I imagine the microbial bacteria multiplying right away and I have to wipe it off immediately!"
If only he felt the same way about showering and brushing his teeth....
So the house is quiet.  Maybe tomorrow when everything in town opens again, I'll be able to start cranking on my ending edits and get my manuscript out to my writing group.  Grandma said she would take Toots out with her in the morning on her usual exercise excursion.  Time to get back to the routines now the gluttony time has passed!  Oh yea, I should do that, too....
Posted by cath c at 8:25 AM