Have I mentioned before that I had a brief stint as a professional baker?  After a couple of months trying to manage the biorhythm shift to go to sleep at four in the afternoon and wake up at half past midnight while mothering a kindergartener and a toddler with unknown as of yet form of autism, I realized I really couldn't handle it.

But I did learn one very important thing while stirring batters and rolling doughs at a stupifying hour: baking is not for improvising.

I forget this now and then. Witness: 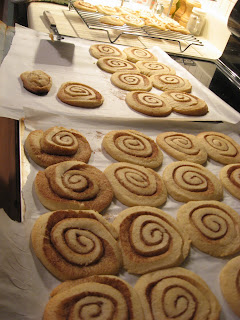 Many years ago I made great spiralled snickerdoodles one christmas because I followed a recipe. A friend emailed me a recipe for them last week and it gave me an idea.  Rather than print hers, I improvised with the usual Better Homes recipe for standard snickerdoodles, and put the cinnamon sugar mixture you're supposed to roll little balls of dough in, along the top of the rolled out sheet of dough, then rolled it into a tube and refrigerated it, as I recalled doing previously.  They were huge and fell apart. Not very snickerdoodly, and while tasty, they just don't measure up in presentation. 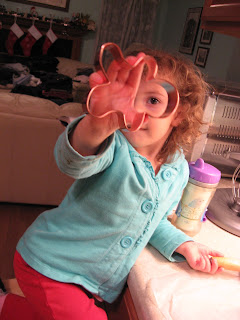 For years, my gingerbread men have been minis, about an inch and a half long. Great little mouth poppers, but I wanted real gingerbread men.  My hand cramps every year from cutting scads of guys out of dough with my crab claw tip of the fingers grip. Honey brought home a beautiful standard size copper cookie cutter yesterday.  I love him.  I love Toots, too.  She's cute. She does some things on cue. 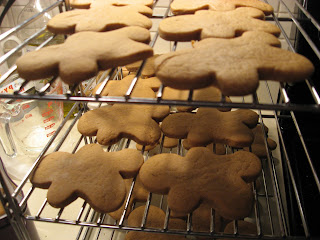 Unfortunately, as I bemoaned yesterday, I screwed up measuring as I doubled the recipe. Then I attempted to fix it in a rush, didn't add enough corrective sugar and wound up with these puffy fall-apart-if-touched, pale for a spice cookie cuties.
Today, I have a holiday lunch with my writing group, during which I will hand back end chapters sections of two critiqued manuscripts that I stayed up way too late trying to focus on last night after the all day cookie (and laundry) extravaganza.  I was exhausted - concentration nearly nil.  But I enjoyed the stories.  They're good.  I'll let you know about them when they get published.
Anyway, after that, I will make the icing and bake the sugar cookies, the dough of which awaits in the fridge. It was the first dough made yesterday, and the last dough to go.  Thankfully, I did not improvise or mess it up to begin with.  Then I will ice them and the gingerbread men.  Maybe the icing will save the poor little guys. Save their arms and heads falling off as well as boost the sweet factor.
My adult family members always complained my cookies were too sweet anyway.  Let's see how they like these.
Perfection was always overrated in my book, anyway.
Posted by cath c at 5:13 AM