It's been a while since I shared Captain Comic's ...well, comics. He's branching out into color.  I can't tell you how many black and white similar works have been balled up and thrown all over his room.  He seems to be taking color seriously now.  He even kept the page in the spiral notebook while he drew it.  Like he could save it in an organized manner rather than just toss it to the flotsam of spiral paper worms and balls of abandoned ideas. 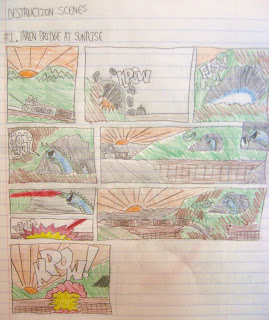 I particularly like his orange sky sunrise rays and lettering. I also think he has a great eye for use of space. Now as to what is going on in that space, that's another matter entirely.  And quite the never abandoned theme.
Posted by cath c at 11:23 AM