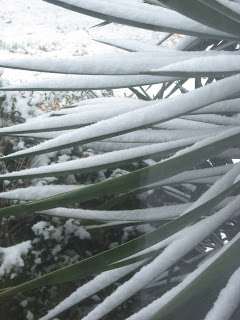 view thru front window and yucca
When we lived in Massachusetts, we got a lot of it. And that is an understatement for the region we were in. Here, not so much.  Last night they cancelled schools all over Hampton Roads just because of the threat of snow. When we lived in the snow valley up North, we'd be up before dawn shovelling three feet of heavy white off our cars to get to school which didn't even have delays most of the time.

Everyone around me thinks I'm crazy the way I profess my love for the winter white.  But even if I was born in Atlanta, it snowed on the day I was born.  And you know what?  Every birthday of my life, it has snowed.  I consider it my special blessing. Like a promise from the creator, an inside wink.  Last year, it did not snow on my birthday here in Hampton Roads, Virginia, but it did where I grew up in Connecticut.  When I talked to my dad, I was thrilled. Because once again, even if not directly for me, it did snow on my birthday. Other birthdays here, I have spotted lonely tiny flakes.

This morning, Captain Comic was the last to know about the cancellation (ha, he finished his homework...)  Upon being informed:

Mom: We're not in Massachusetts anymore are we?  Funny isn't it?  But they are not prepared for snow on the roads down here the way we were in MA.

Mom: Remember all the snow we used to get?

Capt. Comic (wistfully):  I loved crawling through the tunnels...


And that about sums it up.  My favorite place to live my whole life was in that little town exactly because of all that snow and sledding and snowball fights and building snow forts with the boys....but it's fine that I traded for the beach in close proximity here. Where I grew up in Connecticut, I was lucky to have both the great sled yard of the neighborhood and a bike ride to the beach.

Anyway, today there is snow, and it's slick and beautiful.  Even I won't drive in it. and I watch the tiny flakes swirl in the wind, fast and dancing out my window. 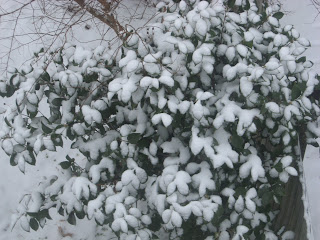 camellia from an upstairs window
Capt. Comic has already been out to 'the hill' - really a berm at the back of the neighborhood baseball field. He was so excited.  No layers or boots speak of, just his coat as he dragged the blue plastic sled around the bend. He came back in shortly after, wanting hot cocoa.

Toots has been watching it swirl and fall out the window, entranced by the magic that has always been such a joy for me. 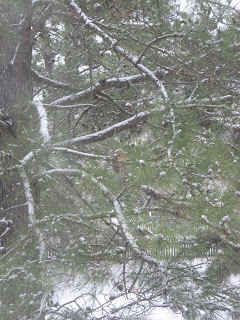 And even Mr. Cynic awoke with a smile, and headed out in it to ride his bike to the next subdivision to his friend's house. I just hope he found some gloves to wear...He is disappointed that his Jazz Choir's Winter Concert is postponed, and he hopes that it is rescheduled for tomorrow rather than cancelled altogether.  He "worked too hard for the past four months to not perform!" And he wants to wear the red sparkly vest and bow tie. It's like a badge of honor.  I never would have suspected, though the kid still rocks a necklace, much like he did as a toddler.

My Christmas shopping was slightly thwarted, I tried to drive, but it was too slick even for me.  I was smart and turned around at the first corner.  I can't say the same for the rest of the people in this area who are currently on the road.  That's part of why not just the schools, but a lot of other places are closed today.  It's okay, I did a little online shopping and shipping said it would get to my nephews in time.

Hmmm...the flakes are getting a little bigger....that means it's a hair warmer and beautiful.  I may finally get in the Christmas spirit after all.
Posted by cath c at 10:06 AM