I think I skipped something the other day.

Something about a day that started well before dawn looking like this: 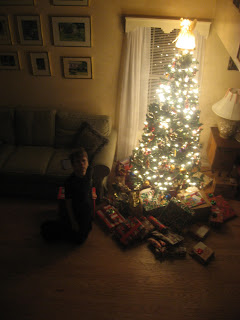 Actually, considering he woke a couple of hours earlier and could be heard stirring throughout the house in something above a pitter-patter, Captain Comic waited very patiently for the the rest of us to stir.  I think I took this from the top of the stairs, sometime around 5:45 am.  Don't place bets on my guess, though, all I know for sure is that he already had been in my room about twelve times trying his darnedest to be quiet.
Not long after, my visiting parents, Grandma and Honey roused out of bed, the coffee was on and we were all done opening everything under the tree.
Toots didn't quite bing awake like him.  Neither did Mr. Cynic.  But they both did 'wake' quickly to get down the stairs around six, at my knock on the teen's door and shoulder shake of the little one, who enthused, "Santa came?! Is he stiw hewe?!" 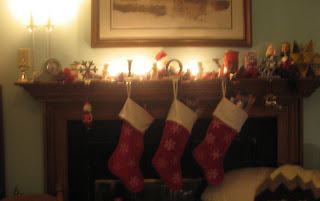 At the sight of the above, Toots was beside herself tired and excited.

And Mr. Cynic...Well, let's just say he'll love me for posting this shot: 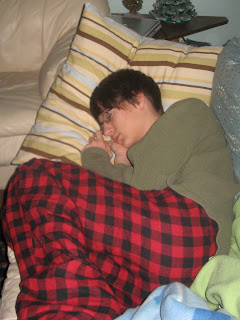