Nature is slow, but sure; she works no faster than need be; she is the tortoise that wins the race by her perseverance. -Henry David Thoreau, naturalist and author (1817-1862)
I lived in Thoreau Country for a handful of years, a mere ride down Route 2 to Walden Pond. In college, I took way too many classes about or around the Transcendentalists, too, so I’m pretty well steeped in the guy. Never mind that for over ten years I was an active member of the UU church in Harvard Square where he stood at the pulpit and gave his famous speeches along with that other nature guy of the area, Emerson.

What most people don’t realize when they think of him sitting out in his cabin by the pond, is that he actually lived at his mother’s house and scammed sustenance and cleanliness from her and his friends. He only visited the cabin for short jaunts. Think of it as his vacation home.

That’s not what I wanted to write about, but a little background never hurts, especially if it dispels a myth of his living there and makes us realize he was a little closer to and dependent upon town just like the rest of us suburbanites.

What I want to talk about is the fact that it’s August here in Southeastern Virginia, which is rather like August anywhere on the North American Continent, except possibly a bit more hot and humid, therefore even more languid.

Languid has always been a favorite word of mine. I think it sounds exactly as it is. It’s Oscar Wilde on laudinum, it’s a model in repose, a heavy blanket of velvety robe, and a dog day of August.

Most of my blogs lately have been short and rather on the slow side - taking a moment to peek at a butterfly or take in the scenery. The bulk of the summer harvest is past and Fall has yet to arrive. School is around the corner, and no kid I know wants to do more than sit around and be bored, even if they are complaining about it. I think that’s why August exists. Nature tells us to slow down, take in the view, before we start hustling for the Autumn Harvest, start school, start revving up retail for the Holiday season that seems to start earlier and end later every Winter.

August is a wait time, a time to muse, a respite from the rest of the year. February is a lot like August for the fallow months, an emptying of the mind, a lessening of activity. But August is hot, humid and languid about it whereas February is bundled up in woolies in front of a fireplace, huddled inside. August is as naked as you can and still be decent if you’re in public, when the air itself feels like clothing. February is curled up in a ball, everything tucked in. August, even in the air conditioning, is: 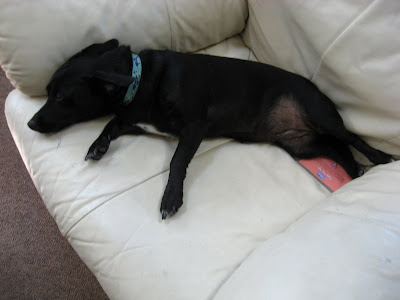