No this will not be an alphabetical listing of any kind , thank goodness for that. I'll save that for a day when I have very little happening in the idea department, which may be shortly, but hopefully not. So you are spared for now from a list of random whatnots that happen to float through my brain in alphabetical order. Trust me, this happens.

This A to Z is Aspergers to Zoo. Our local asperger's support group is as much for parental support as for a social opportunity for our kids who have difficulty with socializing with neurotypicals, or in the jingo of John Elder Robison (see sidebar books), nypicals.
So a lot of us invaded the Norfolk Zoo on their Special Needs Day when one attendant Adult and one Special Needs Individual are admitted for free. In our group, we call our kids, aspies. I've referred to S as such before or talked about his aspie tendencies. It's easier to say and sounds much lighter and fun to say aspie rather than Aspergers, Aspergian or Asperger's Syndrome.


My take is while it can be difficult at times, for him or for anyone dealing with him, S is an infinitely more interesting person than those who won't deal with him well, and therefore don't know what they're missing because of their impatience or intolerance. They might learn a thing or two, too, because, he's one educated expert in the fields of his interest. Most days, he walks up to me to discuss, out of the blue, something like Koko the sign language gorilla, and he fills in lots more facts about gorillas in general, and their habits in the wild, and how they might react to one of us stumbling across them suddenly if we took a trip to the African jungle, which would be something like thinking we're like them, only shaved, and therefore would try to communicate with us by their behavioral modes, such as flinging some mud to see how we would respond. And he would add much more factual detail than I just did. I honestly have no idea how he finds so much out when he has limited access to the internet, which he usually uses primarily for youtube Godzilla clip viewing or reading godzilla movie reviews, or going to the Toho Studios site.
That is the A - Asperger portion of today's program. Here is the Z - Zoo. See, I skipped 24 letters. 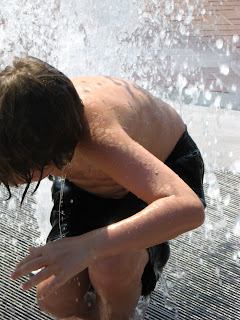 First things first: S hit the showers, or water fountains. It was fine, lots of kids do. Just wish he was this quick to do so at home!

Peacocks wander all over this zoo, one of the things I love about it. This one is not nearly as vain as their reputation suggests. He did not want to pose, wouldn't even face me, rather like a certain teen or his mother I know. (ehem, it's rude to point.)

Monkeys are so cool and so hard to photograph. just look how this golden spider monkey's tail wraps around his whole body. I want a tail. 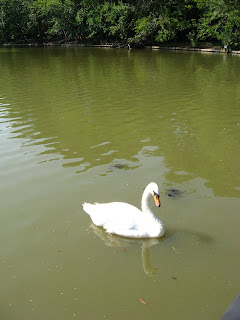 Pardon the blur. I was starting to get very hungry, hard time holding the camera still as I shook from a low blood sugar moment. K said, "Barred owl, how ironic." 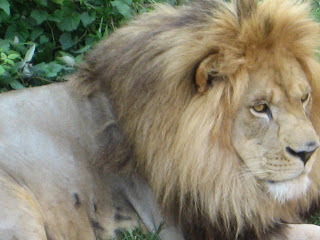 Isn't he just gorgeous? I wanted to climb in and cuddle up, running my fingers through that thick mane. But they don't allow that. Darn. Well, I do still have my face intact. 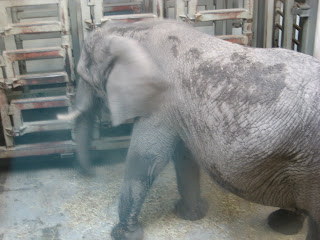 I forgot to mention we arrived very late due to being directionally challenged. So by the time we arrived at the elephants and giraffes department, the staff had packed them in for the evening. It was much cooler in there for them, too. Hard to tell, but this guy, or girl, is absolutely enormous. 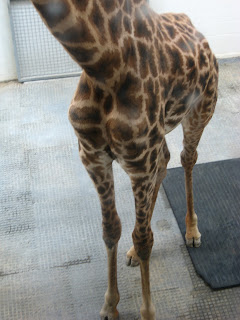 Immediately, a ZZ Top tune came to mind when I got a gander at the these. She's got legs/She know how to use them. 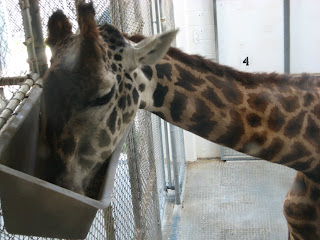 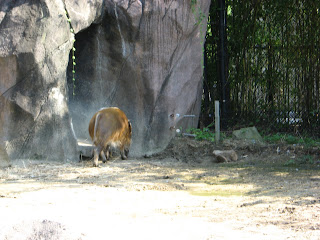 This guy was just rude. Red River Hog had these long beautiful white tipped ears, but all he gave when I pointed the camera was hog butt. Mia apologia. At least you couldn't smell what lay all around as a product from the same. S made a whopping big deal out of that. Personally, I think he was much less stinky than the goats in the petting farm near the front gates.
Posted by cath c at 3:00 AM