Last Wednesday, Honey and I piled a gazillion stuffs, ourselves and Baby C with baby seat clipped into the floorboard of Honey's Honda Element. Elements are four seaters - more on that later. My van was diagnosed as unfit for the road the day before the trip. We started not nearly as early as we thought, but we made it from Yorktown, Virginia to Auburn, MA by 10pm even with the flash flood that hit NYC and the Jersey Turnpike just before Elizabeth, NJ. I wish we were better about camera wielding this whole trip. Frankly, I was not thinking about blogging travels, but seeing bulldozers spread out water in front of semis that were wheel deep on one of the busiest roads I've travelled often over a lifetime was pretty darn unusual, and pretty cool. So was the rainbow over the hazy Empire State Building in the distance. Baby C was a real trooper traveling toddler, too.

Auburn, MA: Honey will not like that I am posting this pic of him as a six year old girl's fashion plaything. Oh well. He rarely peeks at the blog anyway. So I won't tell if you don't. Seriously, don't tell. Our hosts' home was under massive construction and much appreciation is sent to them for letting us invade in the midst of all they had going on.

Our hosts, Mike and Raffy have two dogs. We've seen them through others and particularly miss their old black standard poodle Jake, but Zimba was a good old girl with the babies. Mike's brother's family lives across the street and this is his giant nine month old. She weighs in as a whopping 24 pound buddha . Baby C at sixteen months is barely 18.5. We have pediatric confirmation that she is healthy though petite. So was I. So was K at the same age. Come to think of it, K is still pretty small for a fourteen year old male, but he's working on it at a scrawny 90lbs. I wish I'd gotten a shot of Jack the labradoodle who seems more horse than dog or a shot of when we visited the horses up the street. Baby C was mesmerized. A girl after my own heart. We seemed to have a theme this trip of meeting giant babies and horse sized dogs. Baby C loved Jack, couldn't get enough of him. She didn't even come up to his chin. 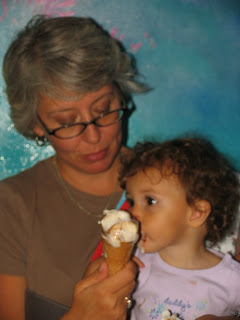 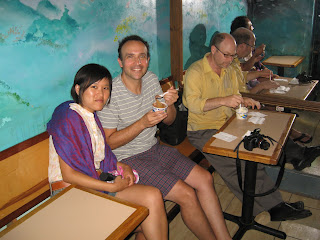 Harvard Square, Cambridge, MA: Steve's Ice Cream has an old bank vault in it that was painted to look like an aquarium in like 1985. I can remember going there when I was a student in western Mass. I think I spent as many weekends as possible in Boston and Cambridge even before I moved there right after college. It helped that I had a working car in college. Unlike now, and the razzafrakkin van I just paid off. Photo credit on left goes to Ted who is pictured on the right, along with his girlfriend Linda and my other oldest dearest Boston friend, Joe. I know both those guys have always got my back. If I'm ever trapped in a dark alley with bad guys, it's Ted I want by my side, sorry, Joe. Ted's just scrappier for an alley fight. Not that I've been in one since about 1990. But that's another story. I can't believe how much Ted's son has grown, unpictured. I remember when he was a baby and he's going into 7th grade! How did this that happen?! Oh yeah, I have a kid even older. 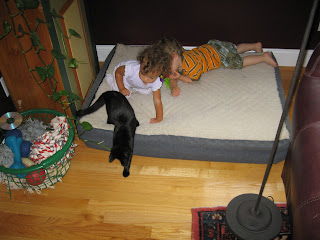 Groton, MA: Same day as Cambridge, earlier: Remember giant baby and horse sized dog comment earlier? This is a picture of my friend Miranda's baby boy with Baby C on their dog's bed. That dog is a Newfoundland. Forget what I said about horses, this dog is the size of a bear. Note basket of dog toys, each of which is bigger than the kitten. This stop on our journey was hysterical. The rain was astounding that day for traveling all over Northwest of Boston. We definitely got a taste of the freaky wet weather the whole Northeast has been experiencing for the summer. Again, I wish we took better pics and Miranda blogged it much better than I can with a severe case of road head here: http://creativeconstruction.wordpress.com/2009/08/03/life-art-and-friendship-in-the-flesh/
Next installment is loaded with family in Connecticut. Somehow, even though we had the camera out for our foray into Rhode Island to pick up the boys and meet up with some of my old college friends, we neglected to take any shots. I blame picking up the boys and readjusting to parenting the mayhem that is my three together, especially crammed into a tiny vehicle with legs draped over mouldy backpacks, the snack stuff, the entertain the baby stuff and more. We were glad the diaper bag was wedged between the guys. It cut down on the 'will you stop touching me' portion of the trip. However, I loved seeing my old roomate Cindy and eating brunch at Phil's Restaurant in Wakefield, RI, which was suggested by another college friend who had a sudden scheduling conflict and couldn't meet us in the end. But I thank him anyway for the tip on the diner. Yum.
Posted by cath c at 7:56 AM