Baby C has been refusing a nap all day, so if this is incoherent or seems incomplete, my apologies. She is screaming her way down on my lap as I type.

Nearing the end of our foray through the miniscule state of Rhode Island, I received a call from my mother who mentioned that my older brother was at his significant other's place in Madison, CT, a hop skip from the border, so I called him to goof about how were were driving by. His longtime girlfriend answered his cell because he was dragging kayaks from the water, and she said to come on by, we weren't due at the other brother's house for a while, and we could caravan together.

I met her father who was a riot and had no idea that we were stopping by when S invaded his house and pushed him aside to get the lay of the place, as he must always upon entering a new place. I'm not certain if he's searching for goods or an escape route, but this is what he does. Anyway, when S realized he was pushing past someone, when the thing spoke, he piped up with an accusatory "Who are you?!" Without skipping a beat, the man countered, "I'm R, I live here. Who are you?!" Thank you, R, for a completely appropriately funny way to deal with him. R then turned to me and said, "Who are you?" So many of us were laughing that I turned to my brother - here we run into the K problem my family presents - WKC, who R knows and replied, "His sister." whereupon R conveyed his apologies and - uh-oh, a new initial problem, R's daughter, WKC's girlfriend, C3 (to distinguish from myself and Baby C) laughed louder than all of us. More dogs, one bear sized, one horse sized poodle, an aged pitbull who is looking for love in all the wrong places, and a bevy of preteen girls cuddling a min-poo to death.

Moving right along: on the way to KHC's house, we caravaned a roadside stop for ice coffees, and my tummy rumbled and so the kids' must be, too, for another hour drive before KHC's house. After WKC and C3 pulled out of the drive thru, we pulled around for pick up and the window girl said, "don't worry, they got it." I laughed more, noting that my big brother thought he was buying an ice coffee for Honey, and sprang unwittingly for 3 large fries, too. Pay it Forward indeed. Right back to when we were kids.

Trumbull, CT: We arrived for the big family get together at my brother KHC's house. He and his wife have two little boys who are growing faster than I can register. Next month they start kindergarten and first grade. They have an awesome playset which allowed us to confirm our suspicions that Baby C is not as easy going as she generally appears. She's really a daredevil at heart. The little thrill seeker must have climbed up and slid down this giant slide a thousand times. Where's her spotter? He's wielding the camera, apparently. When I was with her, I held on. She was so fast, there's nary a clear shot of her out of quite a few on this thing. It was wonderful to see everyone, my brothers their families, my parents, the grand patriach and matriach of the clan. We slept at Gaga and Papa's in Fairfield, and it was good to see my mother getting around really well a mere month after her stroke. One thing about my family, though we might fight, and get impatient with each other and disagree about what happened when, we do generally laugh outloud a lot. 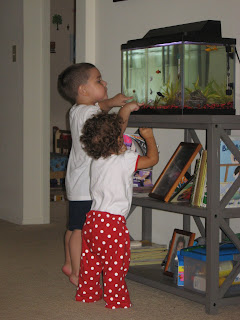 Hamden, CT: The next day we spent the afternoon with Honey's niece's family in Hamden. She's having another baby in December. This is her nearly three year old, M. Baby C loved the fishies and M is showing her the different kinds. "And that's the spotted one, and that's the white one, and that's the black one..." We also saw Honey's sister and her husband, but were sorry his brother couldn't make it. He's very funny and S loves his motorcycle. If you can peer very closely to the framed shot on the bottom shelf, that's M when he had the same curls as C. Have I mentioned previously that though Honey and I met while living in MA, and now live in VA, we both grew up in CT? 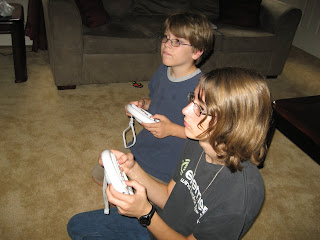 Of course the boys found what they find where ever they can find it. And with new fandangled accessories to boot. Note the looks of concentration. Or are they merely glazed over? 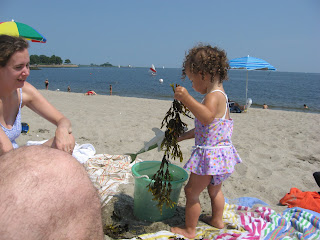 Fairfield, CT: The following day we spent very relaxed at Jennings Beach with my old friend Cathy J and her son. We met in second grade when I moved to a new school. I was writing my name in the dirt in the back baseball field during recess when she wandered over and asked, "How did you know my name?" By fourth grade, her family moved across town. We met up again in the church youth group in 7th grade then went separate ways again, though we saw each other around jr high and high school. I'm not exactly sure how, but we found each other through email around our 2oth class reunion, and have been emailing and sticking close, though miles and states apart ever since. She was the only person who C warmed up to quickly the whole trip. They cooked seaweed bucket soup together at one of the beaches we grew up on. Her family is so local there are historic parts of town from the colonial era named for them. Her husband's family, too. It amazes me how some families are like that. As much as I love and seek stability, my kin and I seem to be wanderers. 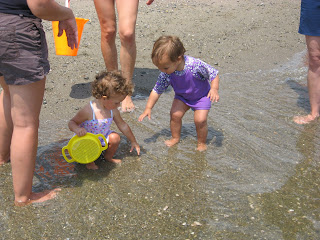 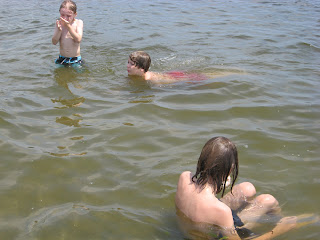 This shot is for balance. I'm overbabying you, sorry. CJ's son and S took to each other almost immediately in a sea monster game. K joined them eventually, too. 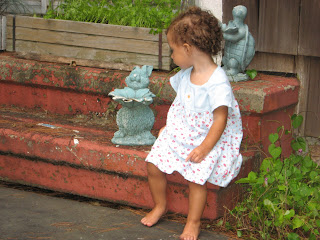 Fairfield, CT: Gaga and Papa's house. This is taken on the back patio of the house I grew up in from the age of seven. It had been raining for 26 out of the previous 30 days. I helped to weed the slate area of the patio, but the pebbled area is so overgrown, my brother WKC is going to resurface it altogether. That is a first in the decades my parents have lived there since 1973. (That's right, moved in when I was seven in 1973, you do the math). C was enamored with the bunny. He had to join us for dinner. 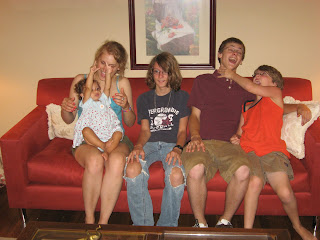 WKC's kids, aged 20 and 17, with my brood in the livingroom at Gaga and Papa's. KHC came to dinner that night, but his little guys had to go to bed for summer camp in the am. This is just one shot of what it takes to get a shot of all the grandchildren. And two are missing. When they can sit still, they are a goodlooking bunch of kids. We usually try to get an annual portrait of all of them together, but believe me when I tell you this is merely one of very very many before we got the good one. L is a sweetheart, C is so rocknroll, K is dreaming of his girl back home (pah!) and W and S survived the photo shoot contrary to appearances.
The ride home was made in good time, outside of NYC and the GWB, that is. All in all a good adventure, that I'm still exhausted from days later.
Posted by cath c at 11:26 AM