Honey and I have now been married for three years.


They've been a pretty crazy three years, too. We packed up and moved within three days of the wedding, dragging the van behind the moving truck, where we sat, with wonky a/c and my cat between us in her carrier on the bench seat of the rent-a-truck in school-just-let-out traffic, half-way down the East Coast.


But getting back to the wedding: we pretty much did it all ourselves on the cheap and we considered that the boys were also getting married with us. We stood on grass, overlooking Long Island Sound in West Haven, CT, and said our vows in front of mostly family, and in that, mostly his, and a few select friends. A lovely, low key dusk wedding, in which K gave me away and S was the ring bearer. He took his job very seriously which made everyone giggle. He practiced the proper wedding walk, and when it came down to it, he did it precisely and determinedly. K forgot to say his line to give me away and I had to elbow him and tell him that was his cue. Then he said, "What?" More giggles. I was so concerned about how S would pull off his part, I never had K practice his line. I think I told him what to say like twice before the wedding.

We had a low key reception, both my parents gave toasts. My friend Joe, Honey's friend Mike and cousin Arnie gave toasts, and we ate. Whole families were invited since the boys were a big part of it all, so many of Honey's little cousins and my niece and nephews and our friends who have kids' kids were all there. The caterer sent triple the food we ordered, charged us less than the original quote, and the cake was pretty and delicious.


The boys have grown so much, and the time hardly seems to have passed. Yet we have a beautiful toddler together now, too. Is this the perspective that marrying at forty gives? The rest of life speeds by so fast, in the blink of an eye, it's suddenly three very full years later. And though we bicker, we also still laugh and cuddle, pinch or slap each other's heinies in the kitchen, and generally embarrass the kids with our affection. Sometimes we seem to speak two completely separate languages, and other times we say exactly the same thing at the same time, and always give a sliding five when we do.

Honey, I love you. Happy Anniversary. I'm glad we're in this together. 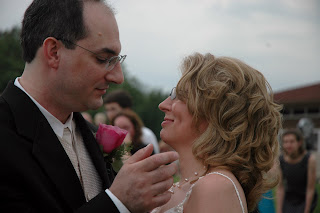