Sundays were made for the Beach

I grew up in a beach town on Long Island Sound in Connecticut. I'll just stop there, because I can easily go on about that ad nauseum, and I am sure at many points in the future I will. Now, I live in more of a river beach town, but it's still a little salty, so that's pretty good. My preference is to head down the road a piece to Virginia Beach. We did that yesterday. It was a necessary adventure as the weather has been pretty good the past few weekends, though threatening thunderstorms, so we didn't go. That is too much teaser for me. I was getting crabby because too many nice weekends in a row without the beach is just wrong in my bones, skin and soul. Honestly, if I sell a gazillion copies of my book, it'll go to a beach house. Then my life will be perfect.

But I was not the only crabapple in the bunch yesterday. Honey didn't want to do much of anything. Apparently the baby was coming down with something and we didn't realize it. S was just being generally non-compliant and loud about it. K had spent the night with his allergies and loads of ticks in the woods, supposedly on a visionquest with his coming of age group from our UU church, and we were bearing the brunt of his mood. So I demanded the beach in lieu of infanticide, thunderstorms be damned.

Only a few minutes in and we were relaxed: 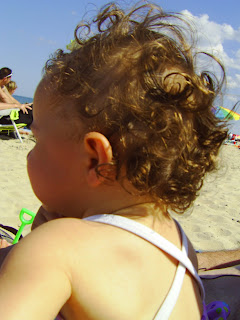 C was not pleased in general with the beach: sunscreen in her eye, sand in everything else and the scary water was cold. Did I mention she seemed to be coming down with something? She also peed on my lap. That's when I was reminded in one of many '10 years later moments' that Swimmies are only meant for containing poo. This was a better brief moment for her.

S has two missions and two missions only when we beach it: to reenacted every 'Godzilla rising from the ocean scene' from all twenty-six Toho Studios features and to dig a bottomless pit. To wit above: bottomless pit. K is a a latter day stunt double for Cousin It of The Addams Family.
We had fun, relaxed as much as possible in too short a jaunt, as we got off to a late start for all the grumpies.