I will start by saying I got walloped by a cold, and could not think straight all weekend to make the costumes I managed to basically finish today.  I had to consult with Grandma at one point, because, I could not for the life of me visualize what was in my head to apply it to the material in front of me.
How many ways can a snap be sewn on wrong?  Let me count the ways: inverse, reversed, not lined up well, ad nauseum.  I don't even care that the Grim Reaper's hood is inverse anymore.  Actually, I do, but he doesn't, so I'm leaving it as is.  But you'll have to wait til Halloween to see the results of Reaper Madness.
Reaper Madness resolved itself much more simply than anticipated.  Please understand I completely winged it in making these costumes, and I am no seamtress.  Four yards of wrinkly black material, I folded 'in half' to fit him from shoulders to feet, then cut off excess and cut a cross slit hole at the fold for his head to go through.  Then I sewed the edges down, sewed a part of each side of the yardage, so that he had a floaty effect, large arm holes, and enough room for his legs to walk, by leaving the seam open from above his knees down.  You'll see, I think it came out quite effectively. Oh, and a hood from the excess.
Witchery Stitchery on the other hand, simplified as I went, but remained complex enough that I was ripping seams and redoing things repeatedly throughout the project. I lost the battle of fighting the cold, stuffles, coughs, etc, but managed to finish regardless.
First, a band for the hat. 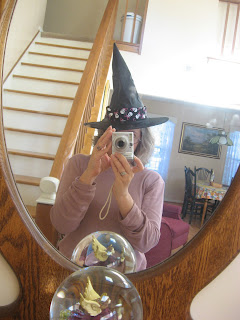 Then I pinned the waistband to match and pleated 2 layers of sheer sparklies, one black, one grey. 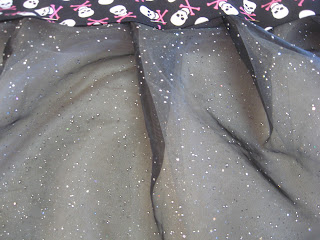 A day later I have this to show for all the ripped seams. 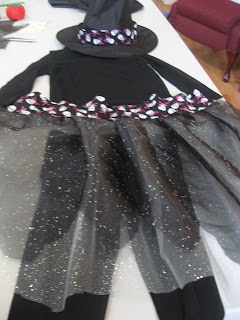 So Toots will have something to wear in her preschool parade on Thursday, and of course, for Halloween.
Done, phew!
Posted by cath c at 3:39 PM