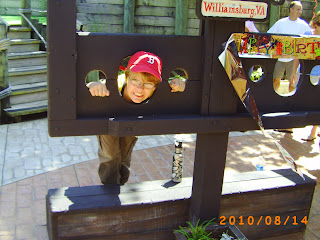 I kind of wish I had one of these at home sometimes, as Captain Comic looks right at home in it, don't you think?  And then Miss Toots managed to make even a stockade look Diva. 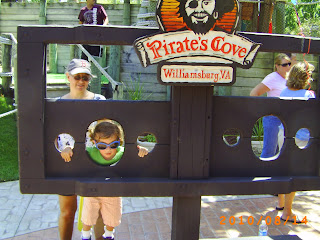 We don't usually do things like go minigolfing, but decided yesterday that something new was in order. We all had fun, even if little shade was available and we were quite overheated.  Toots was very pink in the cheeks after a few holes.  Captain Comic got a hole one!
Today, in the van, while sharing one of his cds with me, Mr Cynic, who plays bass, expressed, "When I hear a band without a bass, I die a little inside everytime."
Later, while making myself a salad with goat cheese, Captain Comic wanted to try some goat cheese, though was hesitant about it.  First words out of his mouth after trying it: "Can we make a goat cheese cake?"
All in all, we've had a fun and relatively low key weekend.  How about you?
Posted by cath c at 10:55 AM