I look at a young man on his way to none of us knows where, but likely having to do with making monster movies or writing and drawing comic books.  But to look at him, standing before me, eighty pounds of the beginnings of puberty, those big blue/green/grey eyes still hold the otherworldly innocence, the tapped into different parts of the Universe look in them that they did when he was little and looking up at the stars or birds or clouds passing by.

I look at him and still see this little boy of three in one of my favorite photos of him.  He is lying in the grass way down in the backyard of my parents' house, looking for a patch of peace in the middle of the mayhem that is my whole family together for a Labor Day weekend visit. 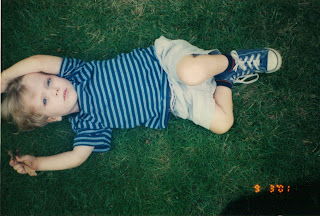 Most of the time, even now, he looks like he is locked in a battle with the Universe, fighting for existence without pain, without misunderstanding.  He is in a continual Yawp! moment a la Dr. Seuss's Horton Hears a Who.    Only rarely does he find peace when he goes off by himself, to lie in the grass and let the breeze and bird chirps calm him.

He is beautiful.  He is my boy. And I believe one day, he'll be able to tell us what his world is like without a fight about it.

12 Things about Captain Comic that don't have to do with Godzilla or giant monsters:

2. His middle name is Bird.  It was the only thing that stuck in my head throughout his pregnancy, when I tried desperately to come up with something else that would honor what little is left of my Cherokee heritage through my paternal grandfather. This name caused great consternation among my family until I called my father on the morning he was born, who then said, "It's Pop's birthday, you know."  End of that family dispute.

3.  He likes to eat sugar out of the pantry by the handful.  Chocolate chips, too.  They never seem to last long enough in the pantry to ever make it into cookies.  I know this is happening by the sounds of foraging behind the pantry door, then the guilty sneaker clad covert thump-thump-thump up the stairs.  Largely because of him, my family keeps the dairy industry alive.  We go through at least six gallons of milk per week.  Don't even bring up how he is capable of demolishing cheese.  And yet, he does not have a weight problem.

4. Opposite of Mr. Cynic's record breaking, a lollipop has no chance of survival in Captain Comic's orbit.  One crunch and gone.

6. He makes me laugh every day.  Every single day, without fail.

7. He finished his summer reading and report and attendant required pictures two weeks before they were due. Even while putting up a fuss about it.

8. He can recite anything he's ever heard, seen or read, if it caught his interest in the slightest.  When he recites a scene from a movie, he includes background sounds, rhythms, and music most of us miss while it adds ambience to a scene.

10. If we're anywhere near water - beach, lake, pool, he has to be near hypothermic before I can coax him out.

11. Much of the time, he may not know quite what to make of Toots, but he loves to make her laugh.  He worships the ground Mr. Cynic walks on to the degree that he'll pick a fight with him just to be near him.

12.  He loves, in his own curious way - as in he seeks out any fact on breeds, behaviors, etc. -  dogs and cats, especially our Lucy the terrorizing terrier and Babette, my beautiful old ghetto Queen.  And of course, anything reptilian.  But right now, he is obsessed with pugs.  Seriously obsessed.

Mr. Cynic may be the child who cracked my heart open like an egg when he made me a mother, but it is Captain Comic who taught me just how far love can stretch and surprisingly, grow.