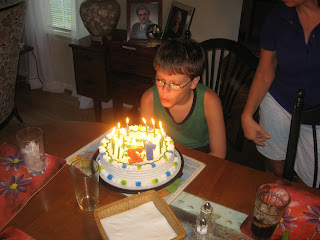 In my book you can never have too many candles.  I once nearly lit my parents' dining room on fire with candles on my father's cake for his 65th birthday.  It was a fairly small cake with 65 candles and one to grow on - a veritable bonfire.
Captain Comic took a while to blow out the twelve, plus one to grow on and the representative numerical candles on his cake last night, but he got them all.
He was excited to receive a video game version of WIPEOUT!  that silly accident not even waiting to happen show on ABC, a promise of the ordered graphics animation software on its way via snail mail after an online order, and the ability to order The Official Godzilla Compendium, which he used relatives' birthday money to order a used copy online last night. There is no way any of us would pay the full price for a new one of those.  It's prohibitively expensive.
We stuffed ourselves on his requested dinner of tofu dogs, chicken tenders, celery and fries (I picked up sweet potato ones) and caffeine free cola and root beer (which he mixed). He opened presents, all of which he guessed ahead of time, but still acted surprised.  Then we shared a family viewing of Diary of a Wimpy Kid.
I have to tell you, especially if you have a middleschooler, it is hilarious.  Captain Comic loved the book, and though there were some plot and character diversions, it generally remained true to the spirit of the book.  Definitely a good renter family movie. The relationship between the brothers greatly resembles our homelife, but insert Toots for the toddler brother.
Speaking of Toots, she aptly summed up our low key celebration during dinner last night when she declared, "My, this is a lovely birthday!"
Posted by cath c at 6:52 AM