This was a sign we thankfully only saw blinking on rare occasions as we made our way North to visit my Beloved Boston, friends and family around Massachusetts and Connecticut as well as retrieve Captain Comic and Mr. Cynic from a month with their father.
However, my head is about as useful as a puddle of cotton candy melting in the rain, so please bear with me as I try to sort out vacation yays and respites along the way.
One beautiful respite happened at Miranda Hersey-Helin's lovely home in MA.  In the late afternoon, kids running around everywhere as a few of the Studio Mother cohorts got together, Toots decided to make a run for it up the grassy slope back toward the house.  Sunlight hit her and the grass just right so Honey snapped a bunch of pictures.  This shot reminds me of Andrew Wyeth's painting, Christina's World - in a good way.  The painting is more heavily wrought with meaning than Toots' climb up the hill is, but I like the contemplative, view from the back resemblance, the long golden grasses, the breeze and sun in her hair. 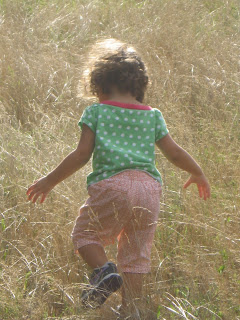 I know, I said I'd give a full report, but the way I feel after air mattress surfing with Toots between Honey and me for 5 nights running, driving hither and yon, over hill and dale, and walking Boston, etc, then rash watch, I can't do it in one shot.  Not that we didn't appreciate the hosting, we are just still feeling the aftereffects, because we are no longer in our twenties and able to crash on people we love's floors with the same bounceback these days.
So welcome to vacation replay week of highlights.
Consider it like stop and go traffic on I-95: eventually, progress will be made.
I will also spare you the slide show.
Since we have been back, I have taken Captain Comic to the pediatrician for 2 days running, with two calls in between, for a mystery rash around his mouth.  He is now on a course of prednizone taper with bactroban ointment because between the pediatrician and me, we determined he's having a pretty strong reaction to poison sumac and poison oak from the yard at my big brother's new house.  And Impetigo seems to have joined the party.  They see a lot less cases of sumac and p. oak down here than up north, so first pediatric inspection was a bit un, un, oh I can't think of the word. see?  melting cotton candy brain.
It's actually an old house Big Bro and his significant other are restoring.  There was a lot of brush clearing involved.  And there's still more to go. As we were at a big family picnic for both families, Captain Comic found some solace hovering around the edges of the yard at times, and if he did what he did to my little potted juniper in our driveway last school year while waiting for the bus to come in the morning, then he probably plucked some sumac and poison oak leaves, then touched around his mouth.  Bingo - rash.  Then picked at it, opening a door for an opportunistic bacteria to move in.
Lovely, isn't it?  Glad I spared you the actual visual now, aren't you?
So, please enjoy the shot of Toots. I'll be replaying it in my mind as I find a way to get through the rest of today which includes more laundry and an aspie on prednizone.  That medicine made me insane when I took it for an allergic reaction years ago.  I can only wonder what it'll do to Captain Comic.
Posted by cath c at 11:16 AM