I'm getting big ideas.  This can be dangerous.

I'd been thinking of this anyway, in a small way, but then I went into the room to wake Toots from her nap yesterday afternoon, and saw her cute little feet poking out of her baby quilt, and I couldn't leave it alone anymore.

So, without a budget, and with Captain Comic in tow for his haircut errand before his middle school orientation event this morning,  I sought out a fabric store, planning on a bright but very simple quilt that I might be able to put together inexpensively - for the first time.  I found gorgeous fabrics, I got big ideas that grew bigger the more fabrics I fondled. Thankfully, I had no budget to speak of, and Captain Comic interrupted me a millions times, so that I couldn't do a decent job of pricing things out in my head.  I left, considering a more thought-out trip to the store without such a blank canvas to work with as I hoarde all the beautiful Indonesian Batiks in the store.

I am not a seamstress, but when the boys were little and a bit before then, I found myself charging into projects with needles and glue guns.  I sewed a Godzilla out of fleece and polyfill, by hand, without a pattern when Captain Comic was in first grade.  I sewed a Peter Pan tunic and hat with a jaunty yellow feather when Mr. Cynic was three or four - again, no pattern. I even made kangaroo ears and tail for Captain Comic and me for his first Halloween, sewed his ears onto a beanie cap and tail onto the Baby Bjorn, and my ears onto a headband. I reupholstered furniture, haphazardly.

I used to peg my pants in high school, by hand stitching.  I embellished denim jackets and jeans when I was in college with embroidery and weird materials - all vaguely by the seat of those jeans.  I'm an odd mix of perfectionist inhibition and ah eff it attitude when it comes to most creative projects, which is probably why they largely occur far between.

I have threaded a bobbin maybe three times since my 8th grade Home Ec class.

But now I want to make a quilt and as excited as I am, I am somewhat intimidated because the boys' late grandmother was an intense Master Quilter and I know a couple of really fabulous fabric artists right now.

I really did just want to make something simple, but my creative juices got flowing, and I don't necessarily feel completely out of depth.

So, last night, with visions of the fabrics in my head, I sketched a couple of ideas. I borrowed some less than great markers from the kids, and this is the result, so far: 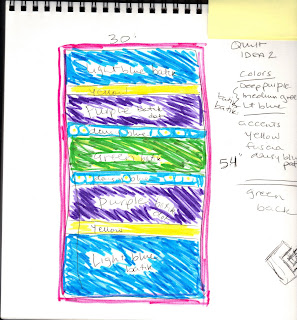 I know, my rendering skills, well, aren't exactly skills, but I think it gets the image across.  The idea is after I stripe the fabrics together, and fill the quilt, I will run the whole thing through the machine (har, har, we'll see how well that goes) to make swirly seams because there is no way I will handstitch that aspect anywhere near like my former late mother-in-law.
Now just imagine the blue a bit lighter, closer to a mottled sort of sky blue. and that middle blue stripe is a very crisp clean even rows of nickel sized daisies on a light blue background. I may use that pattern for the border instead of a deeper fuscia than what you see here.
The purple fabric I have in mind is a really deep watery purple with little coppery gold dots in it. and the green is a batik field of grass.  The yellow has a light scribbly pattern of dragonflies and butterflies in it in white.
What do you think?
Am I not supposed to be spending my creative wellspring on my novel in progress?
Posted by cath c at 7:44 AM