I am trying to cull from the many things we did on our first true family vacation all together, all others involved shooting all over to visit people. I have made a few posts about this one already.

The day of our safari park adventures, we also visited the deepest caverns east of the Mississippi. As you can imagine, pictures were a bit tough, but I will post about both the Natural Bridge Caverns and Luray Caverns in another post. We had a very big day between the cool caves and more animals and ways to see them than you can imagine.

The Virginia Safari entrance was right with the KOA where we stayed and was only a couple of miles down the road from the zoo we visited the day before. I am a bit link happy today. Of course, for proximity alone, we had to go. We safaried in the morning, caved at midday then safaried in the afternoon.

This post is morning only. I really did choose judiciously from the over 500 photos I took that day. Promise. It was HAARD! Okay?

I am not overwhelming you with these like the llamas overwhelmed our vehicle when we tried to drive in....

There were many wondrous horned creatures from around the world. 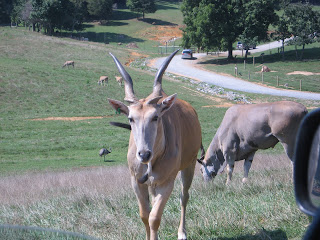 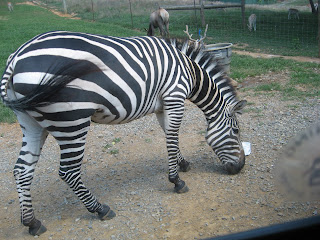 Zebras were on the no feed list, but this guy bullied away a fallow deer and stuck his head into the vehicle, past my lap and stole the bucket of feed from between my feet! Later, a guide chuckled when I told her, and said the only reason zebras are on the list is because they'll bite, not because they are grass fed only like the Bison and Watusi. Well, I'm happy I didn't feed him something bad. *slight eyeroll* 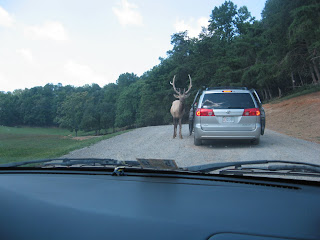 Rules forbid people from more than opening windows to feed. This was very clearly stated when we entered, and in the packet they gave us. These dummies had kids hanging out of the open doors. They were the same loud mouthed gaggle of tourists that made the Luray Caverns less pleasurable for the rest of us when we were there a couple of days earlier. They were a bit zealous and I will give them linguistically challenged, maybe they couldn't read or hear the rules in English. 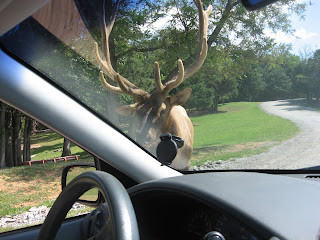 Rocky Mountain Elk really bonded with Honey and me. Or our feed buckets. 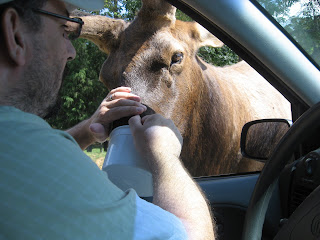 Honey quit shaving before we left for our camping adventure. When we got home, he swore off shaving until his coworkers and boss asked if he was going for the homeless look. Then his mother and I threw our two cents worth in and he even shaved off his precious goatee.
Hello Emu. 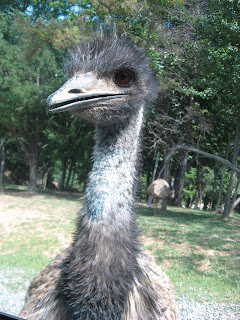 I admit I was a bit creeped out when the Ostriches, Rheas and these guys pecked in the bucket in my hands. Later when Captain Comic sat in front in the afternoon...well, I'll tell you in a later post. 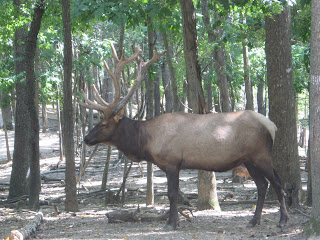 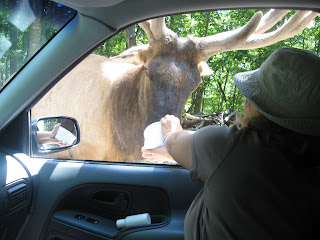 And then I fed him. 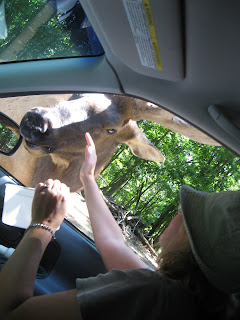 I will love him and feed him and call him George!
(please tell me you remember Warner Bros cartoons) 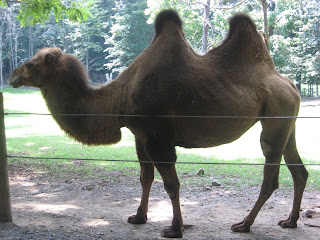 Bactrian Camel, not from the Middle East, like Dromedary (one hump) cousin,
from Mongolia and China. 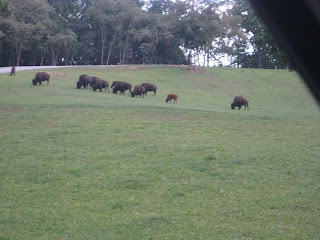 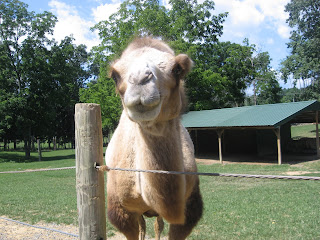 Smooch!
Actually, this was taken just prior to his ripping the feed bucket from my hands.
Later the guide said, "Nobody wins again Omar!" 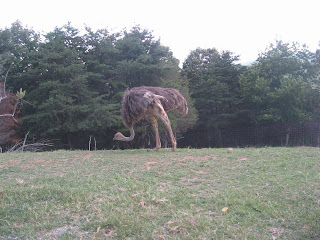 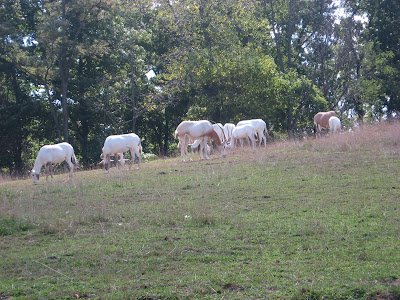 Scimitar Horned Oryx, North Africa (closer shot next post)
Correction: these are Arabian Oryx! or Oryxes, both are plural forms are correct
Oh wait, third try: Some of both - the whiter ones with straight horns are the Arabian kind 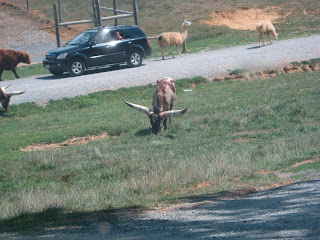 Do the Watusi! (I had to, okay?!) Those are some mighty big horns. 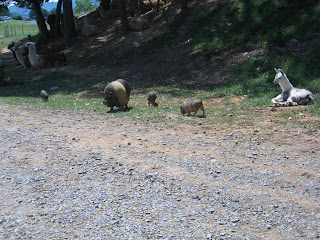 Near the exit and (entrance) were Vietnamese potbellied pig mama and her babies, and a wholotta Llamas.
I found the Llamas particularly pushy and opportunistic, positioning themselves at the gates, and crowding every vehicle as they entered. 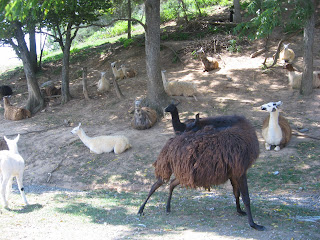 By the exit, they stuck to the shade, my guess is after stuffing their faces. 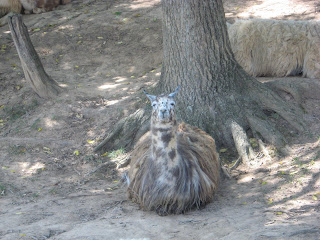 I could have played around with the shots in the computer and enhanced color and contrast, but choosing was challenging enough...all of my vacation posts' photos are straight out of the camera and cell camera.