Hurricane Irene came and went, and left a lot of damage in her wake. My family hunkered down, battened down the hatches, took naps, did puzzles, read by candlelight for just a little while. Overall, though the house sounded threateningly battered and buffeted, in the end we really had no damage. Just had to clean up a lot of little branches in the yard. some not so little, but still we could carry them.

I wish I could say the same for everyone. A mother lost her child in Newport News, near us. Old college friends' family in upstate New York had to evacuate their house by rescue boat. Within twenty-four hours prior, they had an epic battle to remove a squirrel from their house. It has not been a good weekend for them. They are okay, but their driveway and basement are awash.

Many others had it much worse. A fabric artist's studio in Shelburne Falls, MA, picked up from its foundation and took a ride down a raging river that had formerly been the street. There is impressive video of that pink brick building before and after its journey floating around the internet. My apologies for the wordplay.

Back in our vicinity, Southside, at Sandbridge Beach area of Virginia Beach, again, there is impressive video and photography of houses ripped apart there around the internet.. It's my family's favorite beach to day trip to. The little low lying town next to me was under mandatory evacuation, but a friends of mine stayed while the husband volunteered for Community Emergency Services.

In the meantime, here, I am amazed that Mother Nature can go from this: 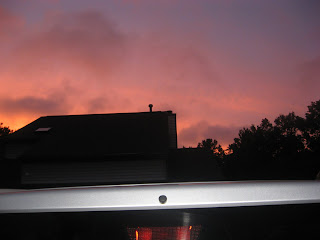 The night before Hurricane Irene

To this on the day of:

Taken early on. Later those birches were bending in half like a Cirque du Soleil acrobat. I did not want to be that close to the windows when she was at full strength.
To this the following day: 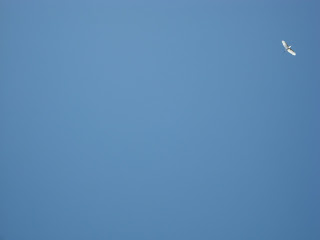 Solid blue, grace of an egret.
My hopes and wishes are that you and yours are all well, and survived to pick up the pieces as we did.
Blessings.