Here are some sights along our route on the Noland Trail in Newport News on Saturday. It turned out to be quite an ambitious afternoon hike. Five miles total,  4.75 of which Toots wanted to be carried, as we set out at her naptime.  Because that's the way we roll. 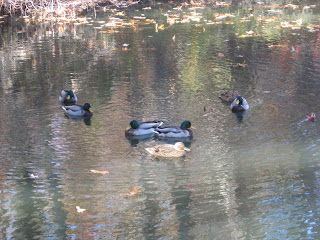 Ducks.  They looked cold.  We saw a great blue heron, too, but he was too far for a good pic with my little zoom. 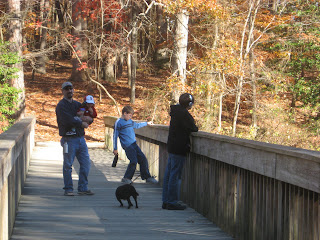 This is the first of officially 14 bridges we crossed.  There were many more little foot bridges, too, across dips in the path for watery days.  Toots counted all the bridges.

Captain Comic and Mr. Cynic were more focussed on the mile and half-mile markers, as they completely did not want to go on the Noland Trail that day, and had little to no knowledge of what it entailed ahead of time.  Heheheh. 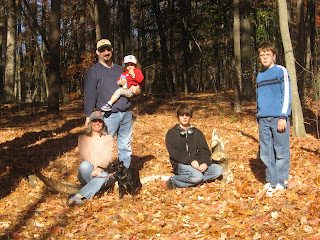 A lovely jogger took a shot of us all together.  Very sweet of her to do. 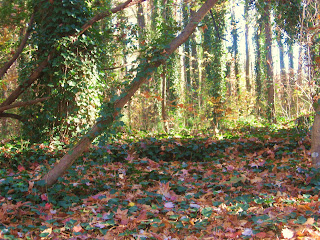 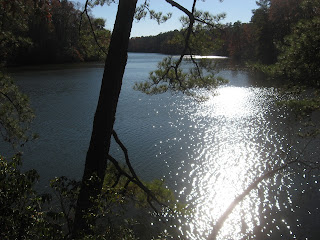 There must be elves and fairies, etc. in this section of ivy covered forest.   At least that's what I drew a lot of when I was Mr. Cynic's age and was reading a LOT of sci-fi fantasy.

Sparkly!  It was a gorgeous, if slightly chill autumn day for a walk around and crisscrossing a big lake. 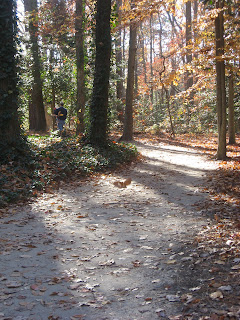 Rounding the bend ahead of me is the rest of the family.  I believe I was struggling with Lucy at this point, as well as trying to take a picture.  There were many dogs to meet along the path, and Captain Comic HAD to meet all of them. And Lucy had to read all their pee-mail. 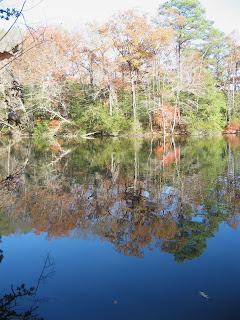 We found a bit of a cove with some still and reflective water.  I love the blue. 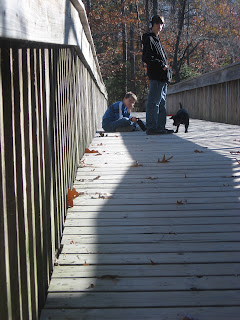 Another bridge, somewhere before the halfway mark. Exhausted Captain Comic, glaring Mr. Cynic. Lucy is still excited about the hike, but trepidatious about the bridges. 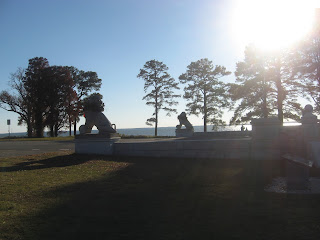 The Noland Trail runs through a system of parks around the Mariners' Museum.  This one is called Lion Park.  The big stone lions look over the James River and wear wreaths around their necks at this time of year. 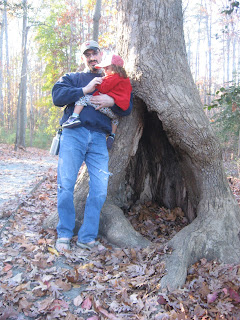 Toots did not want Honey to put her down at all, not even to stand in this hole in the tree where she would have looked like a cute like elf.  By the way, that red corduroy coat was mine when I was little.  My mother saved everything.  This is one of the few items that is still wearable, 42 years later.

All in all, a lovely afternoon with some chill fingers and some gripey boys who had their fill before we found the 2.5 mile marker.  Honey and I really enjoyed it, even if our knees, hips and backs had enough long before 4.5 mile marker.  And Toots was a real trooper for a napless tot. Of course, Honey's arms were numb by the end.  He was a real trooper, too.  We all were, come to think of it!
Posted by cath c at 12:47 PM