a few for fri. including weekword

Carola Bartz chose this week's Weekword. For many more responses and where to go to see them, please click on her name.  I am trying to remember (i am terrible at it) to seek out the next week's prompter, and so far this will be my second week in a row participating.  I think I managed about that much at some point during the summer, too. Of course, I remembered this morning!  So here's some bright morning sun through my office window, and some Virginia tree color beyond. 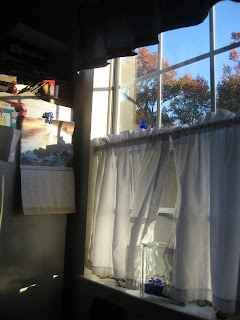 I like the shadow lines extending from the window framing.  Well, I took a small moment to consider the beauty this had to offer, even if I didn't capture it so well.  I love the morning light of late autumn.  It seems rebellious. If the night must be long, the sun wakes up to take charge of the day.

I haven't done much Nanowrimo, speaking of November. The week has been full.  Toots has had a very stuffy nose, I am still coughing, Captain Comic is starting the stuffy, funny enough, while we were at his wellness appointment yesterday....This weekend will not be giving rest to the weary, either.  Too many things going on.
----------------------------------

Speaking of Captain Comic, holy moley.  It's a good thing I love him so much and a good thing he is so funny.  Wednesday, I received a call from his guidance counselor in which she cheerfully requested that I come in right away.  When I asked what it was about she singsonged loudly, "Oh great, then I will see you shortly and we can talk about it then, Okay? Bye-bye!" click.

This was not going to be good.  My imagination ran wild on the ride over, but did not run to what occurred.

I walked in, and the first words out of her mouth were, "First, I have to bless you, because you obviously work very hard!"

Okay, I felt validated. This means, she gets it - and it must have been extreme, because whatever happens, Captain Comic does it in the extreme.

In the meeting, she explained to me that she had already discussed with him some examples of his announcement in his English class that I beat him.  She had notes to refer to.  Her favorite was the description of how I duct taped dynamite to him and lit the fuse.  There were others, for instance I tasered him, and he demonstrated to her how he spastically fell to the ground and shook with electric shock.

She recapped that a lot of what he said was so funny, they were both laughing, but he really dug his heels in about the 'truth' of these cartoon episodes of abuse.  She assured me that she understood something else was going on that upset him, and he was trying to deal with it the best way he knows how, but that legally she had to address the allegations.  "Don't worry, I won't be calling Child Services." What a relief.

She met with him again after our meeting and explained about how you may think your mom is mean, but she's just setting boundaries to keep you safe. She used a Hoberman ball: 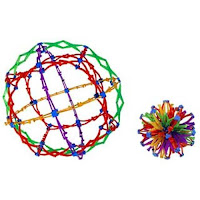 to demonstrate the idea that when he was a baby, I protected him by keeping him close to me and his area of freedom was this small - closed position on right.  Then she pulled it open all the way to show him, "when you are an adult, you will have this much freedom.  But right now, you are here." and she squished it back down to a halfway point.
It was a brilliant way to let him know that even if he didn't like the rules I set and enforce, that they were in place for a good reason.  Visual aid was a bonanza hit for his Asperger's Syndrome style of understanding.  She talked with him about how, when and where it is appropriate to express his frustration with me. And how, when and where it isn't and just how serious that is.
I talked with him again when he came home.  He showed me how he understood what he did was wrong, and that he was sorry he lied about my beating him.
Baby steps, people.  It takes baby steps.  He gave me a big hug, too.  But first he had to walk the dog before he was ready to apologize.
Everyday, he is showing how he can make better choices now, and that he is still learning as he goes.  He's come such a long way in his twelve years.  It's tough much of the time, but he also makes everyone he comes in contact with laugh everyday, with him.  He has so much love and heart, that all the rest is forgivable and dealable.  I'm a lucky mom.  How many twelve year old boys still hug their moms with the affection and intensity of a three year old?  I believe I am in very exclusive company.  And it's very good company to keep.
---------------------------------


Girl's night out
Speaking of good company to keep: a good friend, Ms. Bubbly who recently moved up to my old Boston, called as I was getting in the van to take Captain Comic to the pediatrician, to say she was half an hour out of town...here and she wanted to get together.  Our other good friend, Amilicious - we typically had girl's night out about every other week last summer - was due to head out of town for a retreat.  Anyway, Ms. Bubbly showed up at our chorUUs rehearsal to say hello, and then she and I were going to grab a drink, but we stopped by Amilicious & G-man's house to drop off a book, even if we couldn't see Amilicious.  Poor G-man,  he was stunned that his doorbell rang.  He had just dozed off with their three year old during bedtime cuddles. He invited us in, poured us a glass of wine, hugs all around. Then he announced Amilicious and her friend who had just flown in from NY were out stocking up on groceries for their retreat and should be home any second.  Woo-hoo!
Well, it turns out, when they walked in the door, that the NY friend and I hit it off beautifully, as she did with Ms. Bubbly, too.  And the wonderful thing I realized is we all headed straight into uproarious laughter while also discussing very real stuff going on in our lives, etc.  It was a true blessing to be in the company of these women and the G-man, too.  I pointed out that most people do not generally talk like this.  There was literally no small talk, and plenty of gabbing going around.  I must have called a Cinderella moment umpteen times, until finally, Ms. Bubbly called Cinderella time for consideration of the friends she was actually staying with.
I haven't had that much easy fun in a while.  It was hard to leave, even after G-man headed off to bed because he had to get up and go to work.
Life is good, wear a sweater.
Posted by cath c at 7:24 AM