We spent the Fourth with my in-laws - eating, eating, thunderstorm and eating s'more. badabumching!
It took me a while to figure out what to make to please everyone, since I needed something veggie besides tofu dogs - I am very weary of them. Corn and potatoes were being grilled to go with the pulled pork sandwiches, so that scratched my ideas for a black bean and corn salad and a potato salad. It finally occurred to me to make a cannelini Tuscan type salad: 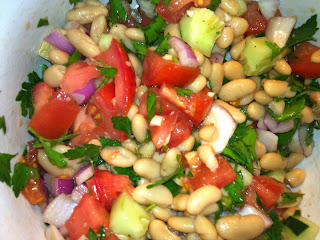 It's the easiest bean for those with veg protein sensitivities(pretty common on that side of the family), and the basic balsamic, olive oil and lemon juice dressing over parsley, tomato, garlic and red onion went over well with the Italian side of the family. And, just because I generally must go off-recipe (like off-roading, but in the kitchen), I added a little cucumber.
Originally, since the boys are typically with their father for the Fourth, I wanted to take them to the local fireworks. But I let that go pretty easily (Captain Comic and crowds are not a good mix, esp with loud noise, add my ankle) when the picnic plans were made. I was happy we didn't attempt that when the thunderstorm hit. We picnicked inside and ended up roasting marshmallows over sterno on the kitchen table. Poor Uncle L got soaked manning the grill at one point. But secretly, I think he enjoyed it.
Toots had not napped and ran circles around their open floor plan gleefully screaming, "You can't catch me! You can't catch me! You can't catch me!" No one was chasing her. She must have run a marathon's worth of miles around that house.
She slept til almost eight thirty this morning. Twelve hours.
We enjoyed watching a run of that History Channel show, How the States Got Their Shapes and some of the marathon on SyFy of old Twilight Zone episodes. Of course, we gabbed and reminisced about old folks and middle aged folks free childhoods outside as opposed to today's kids, on constant watch and playing videogames, etc. The older kids played a game called Fact or Crap. I even joined in at one point.
All in all, a pretty relaxing and stuffed way to spend the day we declared our Independence from the British, 235 years ago. The only firework seen was lightning, including a bolt hitting the Poquoson River outside the kitchen windows. I think I was the only one who saw that when it happened. But everyone heard the boom.
Posted by cath c at 7:37 AM