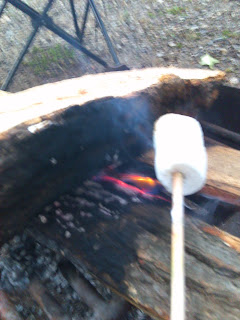 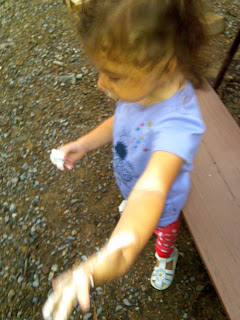 We had more showers overnight then I took Lucy for a dawn walk to the dog park at the KOA. I wish these pictures showed the misty gold dawn better than they do. 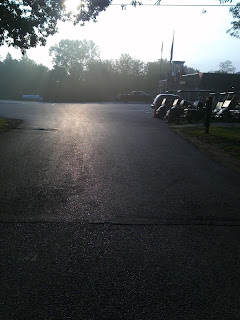 Sunlit mist over a golden meadow, Civil War battlefield, through the trees that bordered the dog park. 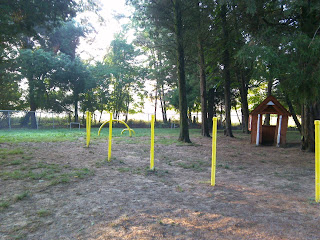 A couple of hours later, after KOA's free pancake breakfast, we embarked on the day's adventures, mostly in an attempt to find Thomas Jefferson Rock, an Appalachian Trail site I've been curious about seeing since I was a kid.
But first we found Bolivar battlefield, Robert E. Lee's first battle foray into Northern territory. It was the first of a many of the bloodiest battles of the whole Civil War. Antietam is in the vicinity, but our focus this trip was more on the natural beauty of the area than the Civil War. As terrible a history as this rolling hill has, it is beautiful. 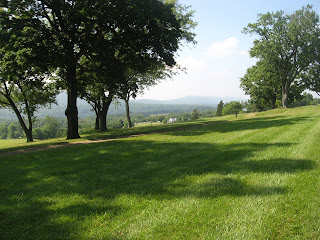 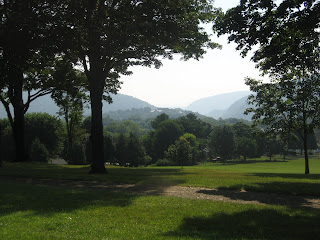 At Bolivar, we finally got a good set of directions to Jefferson Rock from a bus tour guide.
Remember the stone stair case in my prior post? This is a pretty accurate example of what all of the stairs look like. I swear I felt I was stepping in thousands of people's footsteps over centuries. 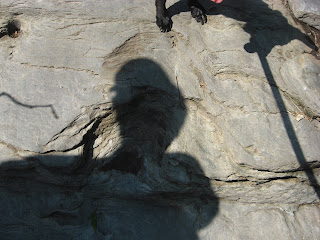 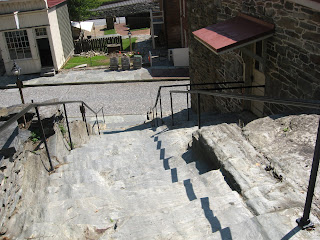 We were hot and feeling that stair case when we reached the church. And then we discovered that was only about a quarter or less of the trip up to Jefferson Rock. 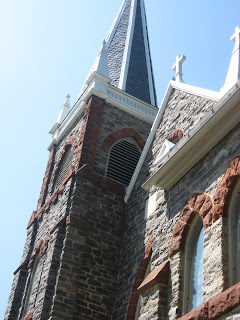 Across the street and up the bend of the mountain side a bit was the ruins of the old Episcopal Church. I guess the Catholics lasted a bit better in Lower Town. 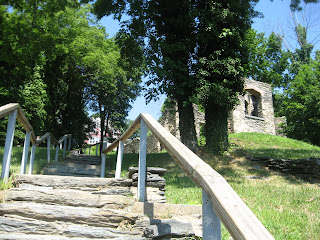 Another third or so the way up we caught sight of the famous rock. This smidge of the trail was paved rather than the old stone stairs. 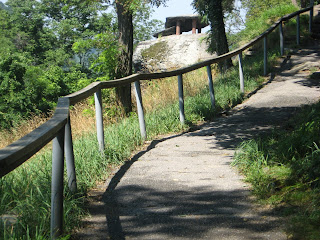 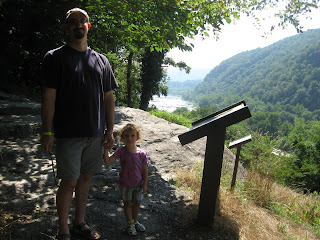 "This scene is worth a voyage across the Atlantic" - Thomas Jefferson 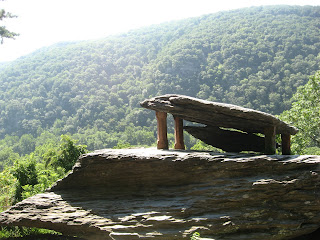 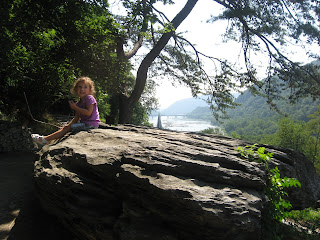 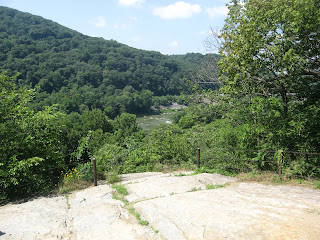 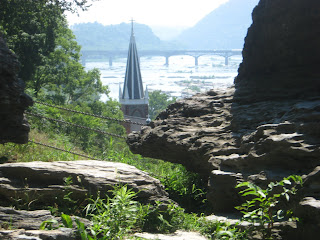 And you know what? Thomas Jefferson was right. The vistas were stunning, even if the rock itself looked like a toy version of what I had imagined from pictures I'd seen of it since I was a kid. It was definitely worth the hour plus climb up a winding steep stone staircase worn down from a couple of centuries' worth of visitors.
Down was harder on my ankle, especially while holding the leash of a little dog who wanted to go with the momentum gravity tried to give her.
Episcopal Ruins 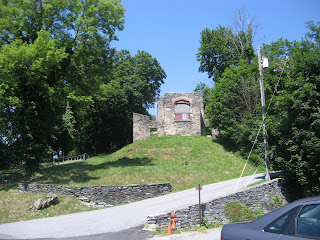 Here's what to see along that lower road way above. What angles up in front of the ruins along the wall is more of a little foot path that has been paved for tourists. 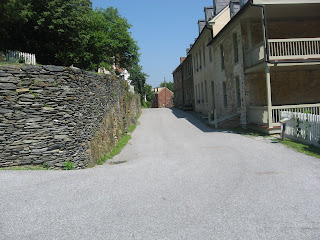 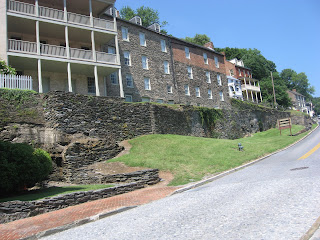 We had lunch and more ice cream then headed back to KOA for the afternoon. Toots wanted to bounce and a while later Honey took her to the pool while I stayed at camp with Lucy. 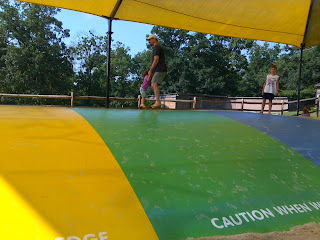 Toot and this kid giggled and giggled when Honey bounced them. 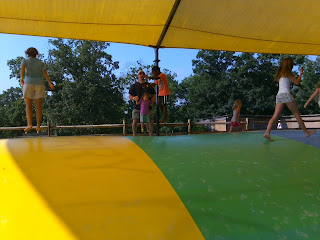 Close to dinner, Toots was tired, it was a big day. 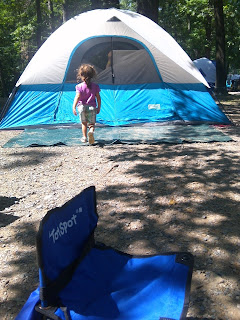 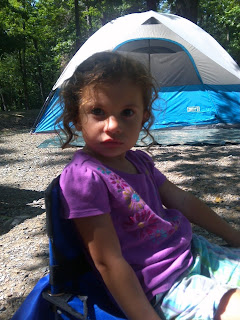 "Aah, I can't do this." She wanted to help me build the campfire. 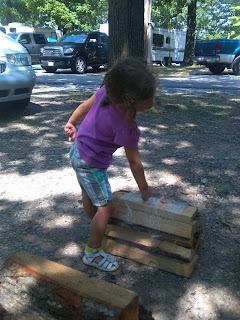 I am amazed at what kids find to do when there is apparently nothing to occupy their minds. Toots made a game of holding a specific rock between the bottoms of her feet. 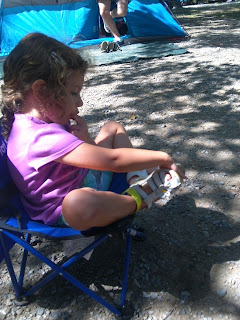 A college friend I had not seen in twenty odd years lives near Harpers Ferry in Maryland, and she stopped by camp bearing fresh grown veggies and loads of fun conversation about things long ago and what's going on now. Great to see her. 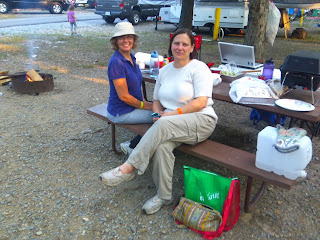 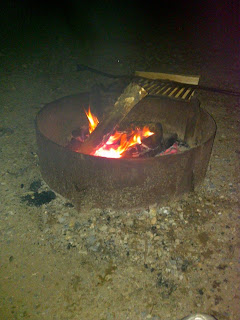 Toots also had tons of fun with kids around the campground. These two were our neighbors in a popup trailer. Toots loved running around, especially with the girl who is not quite a year younger than her, and taller. 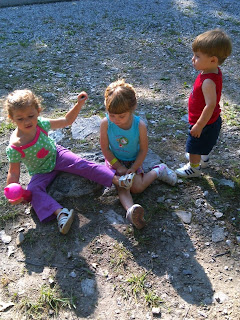 This rock was a major part of their play, situated between our camps. No, Toots is not dead below. She is "westing on da wock." 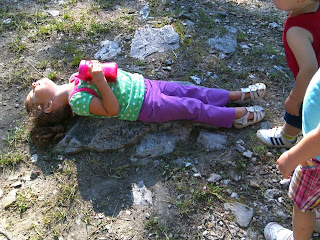 We had many adventures and loads of fun. Some of it was ambitious, but mostly we relaxed and enjoyed being us together in nature and away from home and the TV and all other screens. Even though there was a promise of wifi access, it was spotty at best. We were better for the inconvenience regardless. It was the most refreshing thing to my spirit I have done in a long long time, though, three days later, I am still exhausted, but it's the best kind of exhausted, similar to postpartum euphoria. I am elated, though I've been through a very hard physical task, in heat and storms, and little sleep on the ground. I loved it all.

We're doing it again near the Natural Bridge area of Virginia next month with the boys. Life is good. Bring natural bug spray.
Posted by cath c at 7:34 AM