It was a process that took days, and woman hours, and a few man and kid hours, too.

I had another over-scheduled weekend to try to squeeze the most important thing to me into - because, really I should have done this about a month ago.

I moved the shadiest garden plot to the sunny side of the yard. a 4x8 plot.

Before:
Here is where it was: 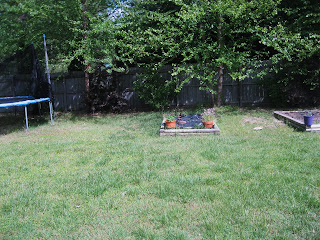 Of course I took the before shot when the plot was in its sunniest hour of the day. Those birch trees, and others absolutely cover this plot in shade for most of the day, especially the back end of it. 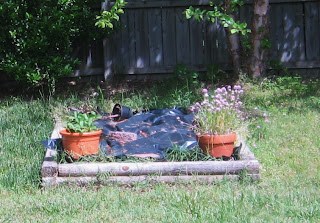 Yuck, right? All the grass and crap growing under the plastic is largely because once upon a time, I bought a truck load of dirt from a guy. Turns out it wasn't good garden dirt. And then I was on bedrest pregnancy, and recovering from it, and had surgery because of it, and so forth and so on, and it sat in my side yard growing things I had no intention of growing in it for a couple of years. Even after I've been weeding it mightily and feeding it mightily for few years, it still just likes to grow crap, not so much what I try to plant in it.
Target, sunny side of the yard. That chaise is where you can find me for a little while most sunny days. And Toots likes to picnic there for lunch. The plot is going to move in next to the plot you see to the right. the wisteria is finally filling in, wall like, after the bloom cycle, to the left of the frame. 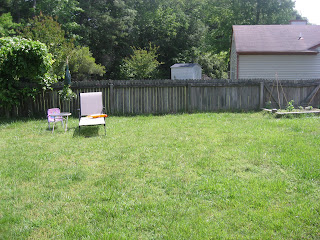 During:
I tried, but couldn't loosen the frame. I couldn't get it to budge at all. Honey did it by himself with a proper lever system he rigged up. Flipped it right over. I love when he gets all manly. 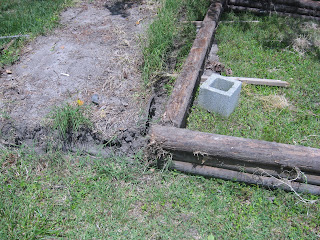 Then he had something going on and I tried to move the frame across the yard with my bad back and ankle and reluctant Mr. Cynic. We couldn't budge it, except to get it up on its side. 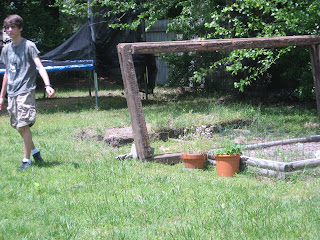 The next day, Honey got back on it and after a failed attempt with positioning on the flat tire wheel barrow, 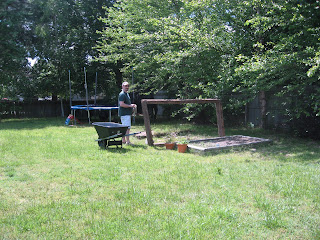 we recruited Captain Comic and the three of us worked with cinderblocks and my garden supply Radio Flyer. 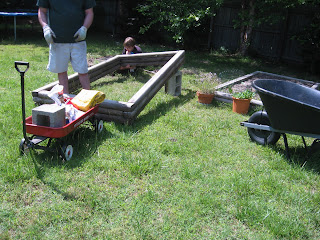 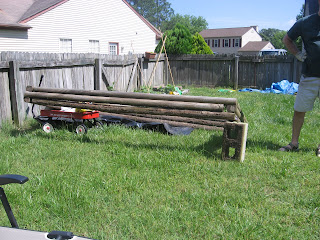 And then we maneuvered it into place on the barrier tarp over the grass. 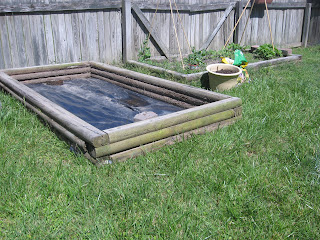 Then we went out to Lowe's for more good dirt and some garden path stones, and stopped for Hawaiian Ices with Captain Comic and Toots. Mr Cynic was working on a school project at a friend's house, but I saved him some of my ice and he thanked me.  Toots climbed her first tree while The Rapture did not come except for me, because I was always up a tree as a kid. That's my girl! 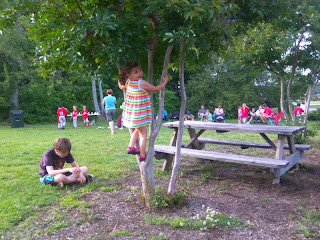 When Mr. Cynic came home shortly after we did, I drafted him to move the dirt and stones from the van to the plot. I told him he could count it as a work out for his independent gym credit. Six bags of dirt and four concrete stones. 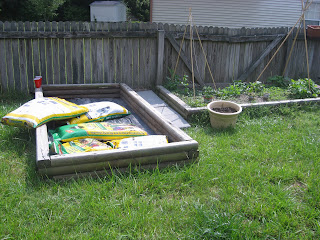 Then this morning, I finally got back to work. But my bad back and ankle did not like me before I did, and even more so now. 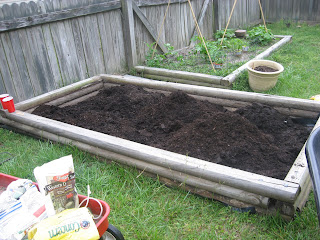 That's some good dirt.
Apologies for the awkward angle. 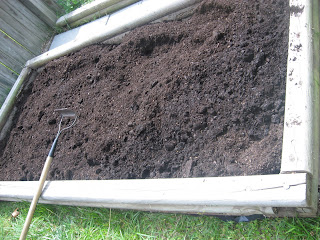 After:
It's still a bit shallow. but I planted watermelon seeds toward the back, yellow straight neck squash seeds in the middle, and a tomato and a cucumber seedling in the front. The fat rain drops began to pelt me. But I decided I could plant one more thing and get all the tools, etc back into the shed in time. 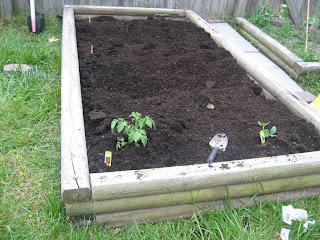 And I managed to plant a pepper in the new plot with good earth. And I believe that completes my plantings for the year. 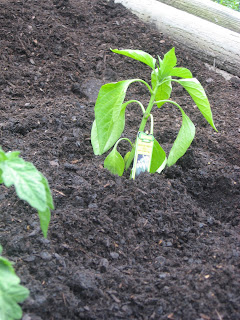 But of course now I am dreaming about bulbs.....