Not really, in fact it's built on play. But they sure take the end of the year to extremes.

It's the last week of Toots's preschool. She went two days a week all year. Tuesday was a party in her class. Thursday there was a performance and awards ceremony. Here's a peek. The whole thing was utterly cute. So cute it could kill an ordinary man.

That's Toots in purple in the front row, with her class of Busy Bees. Behind them are the Froggies, 2 classes of the next age group up.

We mother and educator types were slayed, weeped and wailed - not really, but we were a very teary lot. The Director for fourteen years also retired. It was said that her first students were entering college, entering the military and entering the workforce. She was incapable of reading her own speech. Toots's teacher presented the Director with a bouquet, etc, having worked with her for five years, and had her kids under her care for four years before that. She could barely get through her presentation, utterly weepy.

And then today was the Picnic Festival. Toots started off shyly, which is odd, because shy is the last word to describe her. But once she settled in, she had fun, fished for candy and toys, got tattoos, blew bubbles with her friends. But no matter how many times she built the courage up to go into the blown up caterpillar, she could not do it once the air blasted her in the face from within.

I don't have the slightest clue what has happened to this school year. A couple of weeks remain to the public school system for Mr. Cynic and Captain Comic. Mr. Cynic has his fourth girlfriend since September and will be a Junior next year. A Junior. I still can't get him to drive though he has his permit. He doesn't have a job. He is my baby, but he is taller than me (finally) and his voice is three octaves below mine. 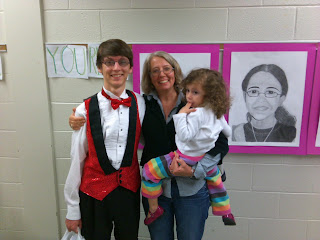 Captain Comic struggled his way into sixth grade and middle school, until the new school finally figured out how to comply with his IEP. Now, he is - for an aspergian - a social butterfly, eating lunch in the cafeteria with friends rather than his case manager's empty classroom. He has joined the homework club, and stays after school to complete his assignments, again with friends, rather than having knock down drag out screaming matches at home with me over them. He finally is getting the hang of riding a bike. 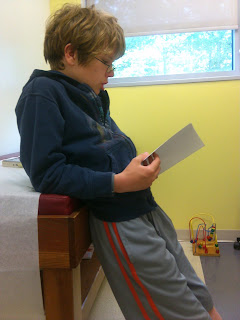 This was taken on the sly of him at the doctor's office
when we went in for an acne issue a couple of weeks ago.
He's reading a pamphlet on childhood diseases, and thoroughly enjoying it.
I don't know about this growing business and how it affects the kids at the moment. But right now, this mother can barely take it any longer. How do I make it stop?
Just for a moment, though, because it sure would nice to one day not have quite so much laundry to do.
Posted by cath c at 11:29 AM