Whoa is me, I've had an emotional week, a lack of sleep throughout it and my weekend, once again, is packed to the gills.

Mr. Cynic's concert was incredible. His Jazz Choir is better even than my bragging about it. Toots bounced around her seat and between Honey's lap and mine. Captain Comic had a sensory issue as the audience began to fill the front section around us. An old man kept looking at me like "Why can't you discipline your kid?" So after a few attempts, I decided to let Capt. Comic do what his instincts dictated, and let him have a seat all the way in the back center of the auditorium rather than fight it. I went up to blackmail inspire him to not move from his chosen seat with a threat that if he did so, he would lose all access to screens for a solid week. He stayed put. I turned around to check periodically throughout all three choirs' numbers. As long as I saw his knees hanging over the seat in front of him, all was good. Mr. Cynic's Jazz Choir was on last. During the second to last number - after the Hanna- Barbera Spiderman theme, of course - I felt a tap on my shoulder. and a whisper right in my ear:

The choices we mothers make. I went with finish watching one son as he excels and trust the one to worry about will be okay on his own to find a drinking fountain and not get into trouble. And guess what?  It worked out. I sent Honey to collect him while I took Toots with me to go find Mr. Sparkly Red Vest. It only took a moment before I spotted Honey with Captain Comic in the hall with all of the singers before I even had a chance to hug my singer. Captain Comic beat me to it, literally, with a not so stealth pounce and grab knockdown tackle hug that took down all three siblings, and nearly me as well, as I had nearly reached hug contact with my eldest when he was hug attacked. 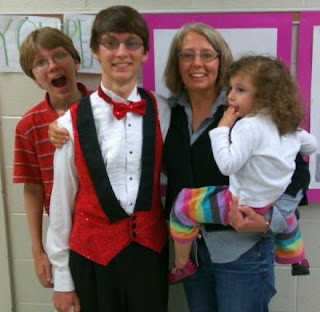 Honey took this phone pic of a mom and her progeny after the attack hug. It's really the perfect shot of us all, exhausted and proud mom with her eyes closed, sleepy Toots, grinning from his performance Mr. Cynic, and goofball Captain Comic.

Life is good. Hug your kids, if you've got 'em. Happy Mother's Day.