Asperger's Syndrome presents some unusual challenges as a parent that most parents never have to deal with. Certain things most parents accept as a given can never be assumed to operate in the same seamless and joyful sense.

Bike riding is one of these things. It involves both fine and gross motor skills, quick and accurate reaction time, muscle memory, and a wide variety of other things most people take for granted. Most neurotypical kids learn to ride a bike by the time they are six years old. Usually it involves one parent secretly letting go from behind and tricking the kid into the ride alone.
In my conversations with many parents of Aspies, I have found typically, if ever, they put together the pieces of learning to ride a bike when they are about twelve to thirteen years old. Captain Comic is that now. Some parents have found alternative bikes, like the leaning back three wheeler, a better way to go for their kids. Some never learn to ride, some learn to ride via an attachment to their parents' bikes, but Captain Comic had gotten too big for that.
He has recently made friends with a couple of boys in our neighborhood who tool around on their bikes and scooters quite a bit. Yesterday they came knocking, and asked him to join them.
I was arriving home from the second trip to the dump with loads of branches that I, Mighty She-ra of Yardwork had trimmed from the big weeping birch on our corner. 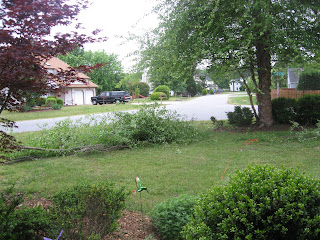 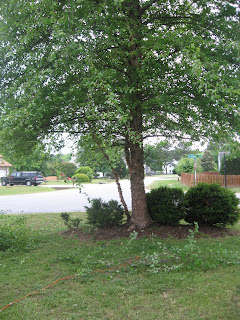 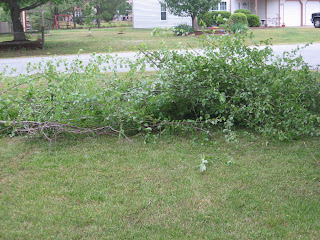 This post is not about me, it's about Captain Comic, but I had to share that I singlehandedly trimmed the entire tree's bottom rungs of branches that reach to the ground all by myself by hand, old school with clippers and handsaw. My friends on Facebook know this already. I was quite braggadocious about my muscley feat over there. I made Mr. Cynic hang from a particularly large branch over my head that I was sawing, so that he might pull it down quicker - all ninety-five pounds of my sixteen year old son. The pipsqueak, I love him.
But enough about me.
So as Honey and I arrived home from the dump, Captain Comic was bursting through the front door, with a bike more suited to Toots's size than a kid who is practically my size, with training wheels and flat tires.
Later when I asked him what his friends thought of that first bike, and his riding along with them on the tiny, flat tired, training wheeled thing, he replied, "They were cool with it. They didn't care."
This makes me very happy: as nutty and oddball as he is, there are peers right here in our neighborhood who accept him just the way he is. sniff
But back to the topic. After inflating the tires on another dusty old thing in the garage, I didn't give up on him, even when he gave up on himself and the process. I threatened and cajoled, as nicely as possible for him to just keep trying. I whipped out Nelson Mandela's tale when Captain Comic declared he was, "Hopeless, I tell you! HOPE-LESS!" And he fought and yelled and fell and threw the bike and ran away, and I threatened no screens (tv, computer, videogames) unless he tried into a side cul-de-sac and back to the house.
And then the magic happened. He stopped fighting me. He stopped fighting himself. He stopped fighting the bike. He listen (sort of) when I talked about feeling his core muscles tell him how to correct the balance. He told me to stop talking and he kept trying, past our house, across the busy intersection and into the other cul-de-sac, and then back home again.
He is this close (fingertips together) to taking off in freedom and speed around the neighborhood.
Witness:
If you turn the volume up you can hear him tell me to stop speaking, and what happens when I say okay, then sorry.  He's so funny. I love this kid.
Nothing is hopeless. Not even a child with a form of autism learning to ride a bike. All you have to do is keep trying.
Posted by cath c at 2:57 PM