First, we made cookies for Toots's preschool Valentine Party. She helped. 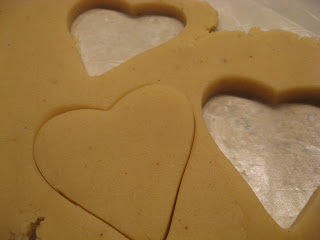 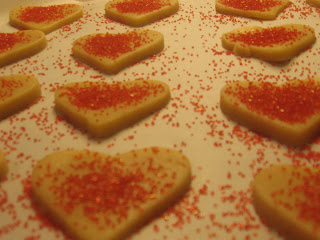 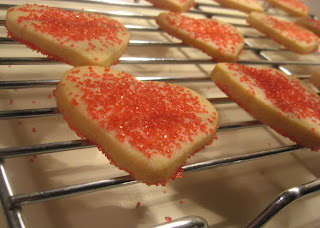 So, now I will conceed to being a dingbat. Funny, I have spent much of my adult life teaching organizational skills to students, yet, apparently they don't apply to me.
All the way back in September, I signed something saying I would do something for the preschool class for Valentine's Day. I thought I would bake cookies.
Many months passed, and when I dropped Toots off for preschool on Tuesday morning, I had a passing thought, "Hm, I haven't seen a sign up sheet for the Valentine's Day Party. I thought I was baking cookies."
Tuesday afternoon, Grandma picked up Toots and her teacher mentioned, "Does Cathy know she's throwing the Valentine Party on Thursday?"
And then I came home from writing group, got the message, sent a vaguely panicked email to the school's 'principal' because I apparently don't have the teacher's email saved, and caused a last minute ruckus among parents and school saying something like no wonder I didn't see a sign up sheet, I was supposed to be the one to put it out? While I didn't hear back from anyone on Tuesday, I decided, after a few things I had going on Wednesday morning out of the house, to go ahead and pick everything up for the party and it was doable because the class is small.
Then I got home to see a flurry of email requests, etc. to parents to please bring something for the party.... 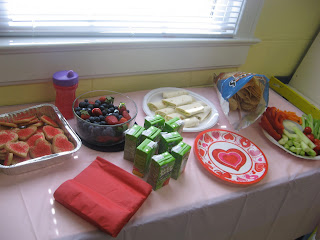 Oy. Anyway, here's what I brought and set up.  Then batches of store bought and homemade cupcakes and cookies arrived, and one mom came in the door saying, "who wants chicken?!" So it turned into a veritable feast.
Not such a bad thing after all, except for the embarrassment and parental flurries.  There was also a predicted case of snow that was likely to cancel school.  We got some flurries and a light dusting overnight, but in the end, there was school, and therefore party. 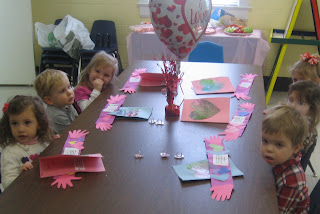 They're a very good class and waited patiently for other parents to arrive after we were all set up with their Valentine art cards and hugs. And there was more than enough food to go around for the adults, too.
Maybe I  can chalk this up to an awkwardly unintentional Stone Soup moment. Yea, that's the ticket!
Posted by cath c at 12:45 PM