i moved the goal posts

I made a plan for the week where I had the house to myself.  I stuck to the plan to a degree, but I moved the goal posts.  Please bear with the mixed metaphors.  I'm sure more will come.

I finally got my printer to work and printed the manuscript.  I was going to read through the first half easily then deal with the big edits for the second half this week.

But when I saw it on paper, I needed to, once again, work more on the first half.  I've been working on that half since February 2003.  I think it's about time I moved to the second half, don't you?

I can barely get through reading the first half without wanting to hunt down Bill Gates and torture him.  My facial expression, when I hit upon one is like unto Bill the Cat.  Do you remember Bill the Cat?  Here's a refresher, and a starter for those not in the know. 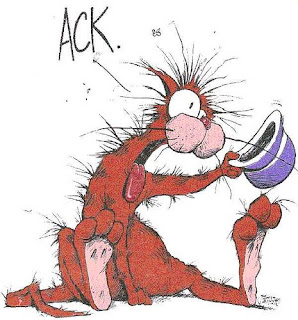 Berkley Breathed gets all credit for creation and imagery of this character from his strip, Bloom County.

Second, where I made changes, I need to smooth transitions of blocks of text better.

Third, my a/c broke.  Honey called the repair folks to come on out the afternoon of the same day I had a meeting of a different sort in the morning, so any chance of working on the manuscript was null and void for that day.

And Fourthly, with the place to ourselves, I successfully shifted Toots to napping and sleeping at night on her own in her crib without much difficulty at all.  And we got a good start on actively potty training.

Toots and I also had a lot of fun just hanging out, we girls, mom and daughter, goofing around the house and such.

I think that was awfully important, too.  don't you?

And Fifthly, is it fifth?  I've lost track.  I trimmed the boxwoods and repotted the driveway markers with new little japanese hollies, so a couple of rather short drivers - are you lookin' at me?! - can see to get out of the driveway without hitting the brick borders of the culvert bridge.
Posted by cath c at 4:15 PM