It's supposed to reach one hundred or so today. My morning shower was a waste of water, as I am now covered in sweat, from just a little gardening.

I fed and pruned the roses and other flowering bushes. I am way late for feeding them, should have put a post-it about it on my forehead. As I cut back dead branches and tied up the hydrangea, I found a chrysalis. I think it's a swallowtail, but I don't know what type. We get a lot of swallowtails around here, state butterfly and all. 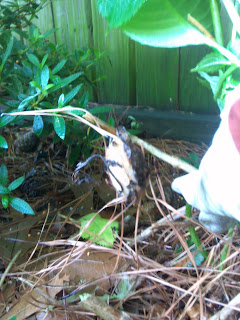 Sorry, still stuck with cellphone shots, until I figure out a better camera situation that doesn't eat batteries.
Here's some lavender by the driveway. I should really trim it back. Grandma parks on that side of the driveway and it attacks her as she gets in and out of her car. 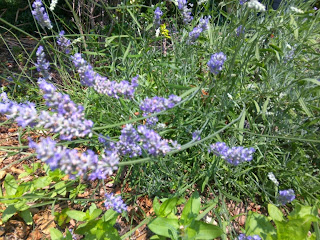 The crepe myrtle I planted street side a few years ago is blooming. The white blooms smell like cinnamon Necco wafers this morning. 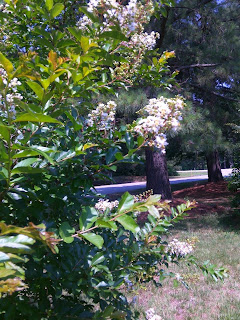 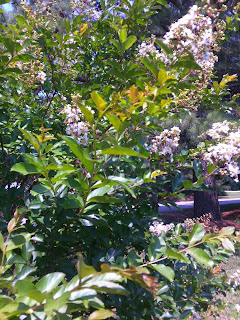 I think I mentioned before that I didn't realize the sprig was spliced with pink when I bought it. The little pink bloom smells like cinnamon, too, but in a different way, a larger, more mellow scent, not as sharp as the white blossoms. Kind of like when I used to take a fireball out of my mouth as a kid once it was licked white and my tongue was on fire - after I drank something to cool my tongue. 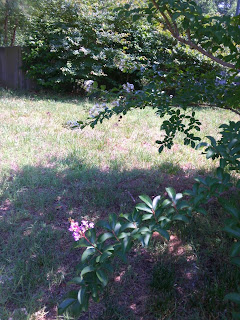 Besides the chrysalis surprise, I found something Lucy left in the yard. She's been digging a lot lately because we have moles, again. She left me a present of a dead one by the deck.