The blur continues through the week, hence my absence here.

I did manage two library sessions of over two hours a piece. Tuesday, I finished edits to the chapter where I had left in the middle, a longer one, and Wednesday I edited the following, shorter chapter. I left after that because a man joined me at the table where I sat and proceeded to attempt games of footsie with me. I would have thought that the 5th time I kicked his foot way and said excuse me in a very annoyed manner, that he would have gotten the hint.  Dude, I may be friendly, but I'm not THAT friendly. And there were plenty of other tables in the room. But I finished editing a whole chapter, regardless, and feel like I won that little confrontation. 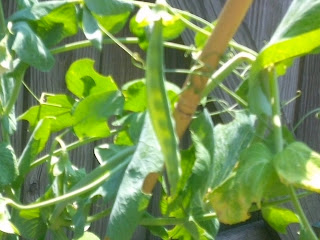 In the garden this week I discovered snap pea pods, and Toots and I have been enjoying them straight from the plant, in the hot sun. She eats them like some people eat Oreos. She peels them open, eats the peas out then consumes the pod sides individually.

That's another thing, it has been super hot here, very demotivational when there is so much going on. I feel for my little black dog, whose fur feels as hot as stove burner to my touch. I have been sheathed in sweat when outside for very short periods of time. Summer has arrived early and fierce. Somewhere is a piece of paper with a poem half-written about it, written upon my steering wheel outside of Mr. Cynic's bass lesson.

Speaking of Mr. Cynic, last night an awards banquet was held for his school choirs. His teacher/choir director has a great relationship with his students. The seniors saying goodbye to him called him a second father figure. In his words to them, he had to pause from the emotion of sending them off. Of course, it didn't help that his daughter is one of the graduating seniors. I am very happy that Mr. Cynic will be under his tutelage for his whole high school career. Everyone should have a teacher who loves and lifts his students as much as Mr. P. I hope in my years in public schools that I was half that for mine. Some of the toughest ones thanked me, and that means a lot, and will for the rest of my life.

At some point this week, I found a forgotten piece of Memorial Day's events in my purse:
Captain Comic discovered the free photo booth at the WHRO tent at Town Point Park in Norfolk. It took a while for him to warm up, which of course just makes it funnier. He also folded and stuck his in his pocket. 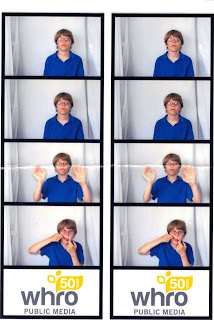 And then he tried out some ninja moves: 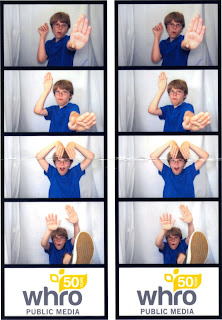 And then he told me about it and some of us got very silly, while he played it straight. He always has to do the opposite. 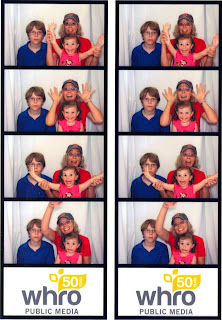 And then Toots had to do it herself. The woman running the booth expressed she probably wasn't tall enough without my lap, but that didn't stop her, the little nutball. It took a minute for her to realize it was taking her picture. 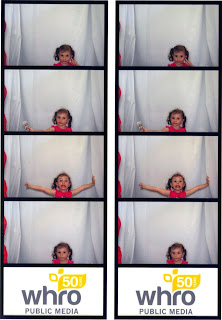 Yesterday, I fell in love with my garden. Sorry, cellphone again, batteries still dead in other camera. 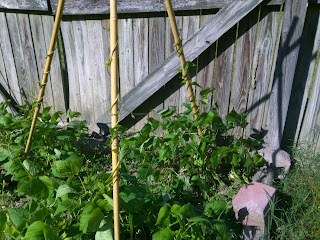 There is something very sexy about bean plants tendrilling up poles, especially when I grew them from seeds. Every gardener knows what I am talking about.
This weekend is over-scheduled, too. Next weekend, I hope I can quit this. Part of this week's mayhem was a two day scramble session to get things in place for my solo singing this Sunday morning. The pianist got sick, we hadn't rehearsed together, turns out the music I scrambled to get was in a different key from the recording, which Mr. Cynic, on bass, and I had practiced. His bass teacher kindly and late one night, after receiving a flurry of panicked texts from me,  transcribed three different keys for him just in case, but in the end, I am going to do the number a capella.
I am going to get up and sing in front of two 'audiences', essentially, naked - without accompaniment.
The reason I never became a rock star is I was too chicken to sing by myself in front of an audience for the past twenty-five years. I have no trouble as long as I stand with a choir. I'll even sing a solo line as long as I am surrounded.
But my voice, alone?
And then I turned forty-five, and no longer feel chicken, just a bit nervous and excited, and that's a good thing. Wish me luck. Please.
Posted by cath c at 5:17 AM