At the beach, the world is bright, the waves lull, even when there is a strong riptide, and everything that has gotten under my skin for the past year rolls off of me in the breeze off of mother ocean. 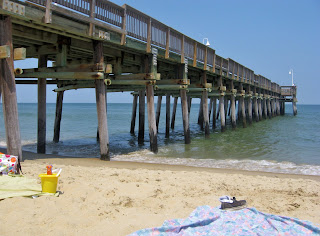 And Captain Comic stops talking when he hits the water, for hours at a stretch, or when he's buried in the sand. His synapses reset from the sensory input he gets from being wholly contained over most of the surface of his skin, whether sand or water. Sensory ReIntegration. I think he and I are alike in that manner, he's just more so, to the nth degree. Other than when he sleeps, the beach is the one environment in which he does not talk endlessly.

I loved the beach for a lifetime before he was born, but for him, I love it even more. At one point, he and I took a walk on the pier to see the fishermen's catch. Toward the end of the pier, one young man had caught a skate! That was really cool for us to see. As we talked with him, he said in the past week, a couple of sharks had been caught at this pier. You should have seen Capt. Comic's eyes bug out when I said, "Right where you were swimming in the same waters!"

It is a struggle to get him to put on sunscreen before he hits the surf. In front of the woman in the white top from right to left is Captain Comic, Mr. Cynic and Mr. Cynic's new gf. She's cute and very nice, also very blonde, hence she is now known as Goldilocks. They had to move away from the pier zone by 200 feet, partly due to riptide, partly the fisherman's lost hooks. We kept the encampment by the pier, so it was a little walk to the swim zone. Toots decided she didn't like the ocean after it hit her in the face when she was with Honey. But I got her there a couple times later to rinse a ton of sand off and to cool down. We got hit with a good sized wave, too, But when I laughed about it, she laughed about it, too. She still would rather go to Water Country. 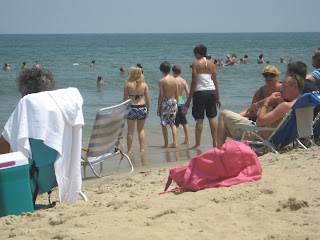 Here is the gang of youngins all helping out to bury Capt. Comic in the sand. Goldilocks was a good sport in entertaining him, and Toots, who is completely enamored with her. 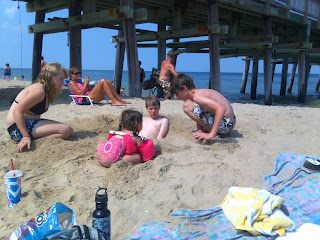 He emerges to rinse off: 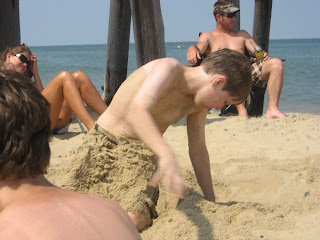 Toots, when we first arrived planted herself in the sand and proceeded to swim in it and douse herself with it. 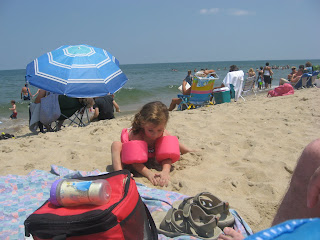 After a couple of hours, and Captain Comic and my walk on the pier, we discovered a playground near the parking lot. 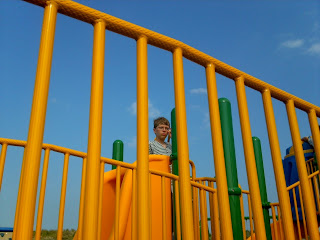 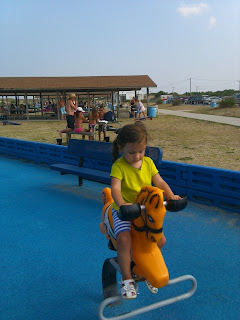 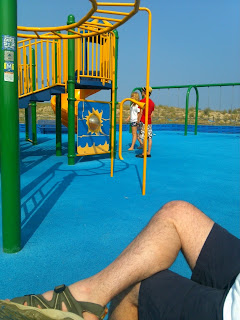 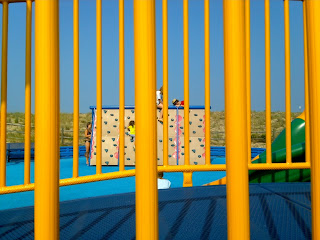 Toots kept up with the teens, fearlessly. I swear she is a girl after my own heart. There was a time I rock climbed, before I totally wrecked my back, shoulder, etc. Captain Comic, after some initial Parkur moves in preparation for making his ninja movie, decided the puddle between the bathroom and play space was the most attractive place to be. Yuck. 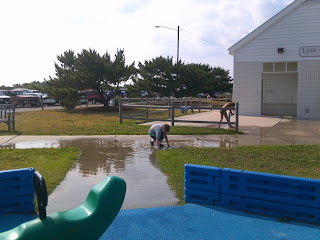 Play is very serious business for a three year old. 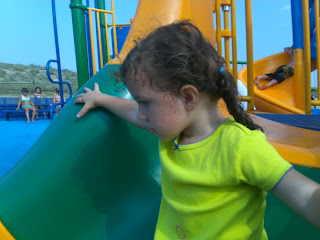 All in all, it was a perfect beach day. Life is good. Wear sunscreen.