Garden, the good and the bad

The other day, I harvested a few more grape tomatoes and a good bit more beans, but I also epsied some more new beginnings both good and bad:

The yellow squash is also succumbing to the diabolical bugs that decimated my squash last year. According to my personal gardening go to guy, my father, they are called squash bugs -nothing quite as effective as telling it like it is - and they lay their larvae in the base of the stems, destroying the plant from the inside out. Once hatched, or past pupa stage, they bore into any squash that grew while they were killing the base of the plant, and eat the squash from the inside out. You know it's them by the blackening withering leaves. Last year I tried dealing with them with pesticides, which I'm really not keen on as I'm trying to be as organic as possible, but it was a bad sight last year, and I was afraid they were going to jump plots. 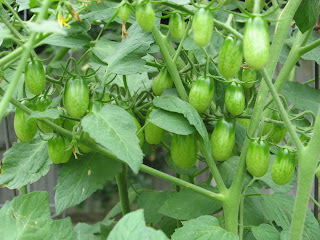 and one lonely okra plant budding some okra from my overheated in the aluminum shed two year old seeds - my own.
There's a zucchini out there, too, and frankly I fear its demise before we can eat it.
So if anyone out there knows how to deal with these squash bugs less toxicly and more effectively, please let me know! I will be heart broken if those watermelons and that butternut are destroyed.