Party in the flower garden without me

I've been neglecting the flower garden out front recently. Just purely being lazy and giving into the 'don't feel like it' penchant.

They don't seem to care. In fact, it's looking rather like the teen house whose parents are out of town for the weekend. Let's just work our way around from the exiting my front door.

Sure, the ground is scraggly and growing some grass and weeds, but this patch of petunias is quite the crowded dance floor. However, they have bullied out the pansies from the whole garden.

The zinnias are quite the giggle patch. Anyone out there old enough to remember the old PBS early seventies children's shows, The Magic Garden? Maybe some of their love of nature and folksy guitar tunes was the start of my Nature Girl persona. I loved the giggle patch. 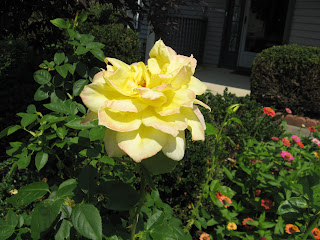 This handsome guy's name is King's Ransom. Fitting isn't it? He smells great, too. I had to pick off a bunch of his Deadhead buddies, but you don't want Deadheads party crashing, anyway. They're such stoners, they always stay way past the fun.

I made a small appearance after all. I'm the shadowy wallflower lurking around the edges.
The grass, on the other hand is making a full invasion in their party crash. this zinnia snuck away from her usual rowdy gang to hang with some quieter petunias. And she's being kissed by a bumble bee.

A lot more mingling going on here: Grass, a couple of petunia varieties, zinnias, and a mystery guest.

The shady gang. I like them: the strong silent types. Who doesn't love the bad boys in the corner looking all tough and cool? They have a little gaggle of clover girls hanging around their feet.

More party crashers. I spend a lot of time yanking out these little tufts of clover. Since I haven't lately, they surprised me with these little yellow blooms. I've never seen this kind of clover before moving down to this climate. There's the beginning of a birch tree in there, too. Lots of those suckers throughout the garden right now. If I leave them alone, I'll have a whole birch forest right outside my front door.

And just who is this chick? I wish I knew. She brought a lot of friends just like her. I also wish my camera with macro was working. Sorry about the blur.
Posted by cath c at 3:00 AM