Obviously, by virtue of a new post, I have survived the Friday night sleepover consisting of four 15 year old males .  Lucy, however, peed the rug.  Poor dog, thrown off her routine.
Onto better things:
My yard is currently exploding in late spring color.
Here is the Wisteria on the slide platform. I wish this were smellavision.  If there's a heaven, it smells like wisteria.  Clean, light, yet profuse. 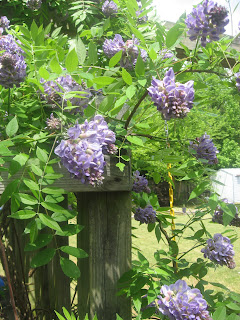 The backyard azaleas, the front yard hasn't bloomed yet.  My azaleas always seem to come about two weeks after the rest of the peninsula has been overwhelmed by their profusion.  I wonder what that is about? 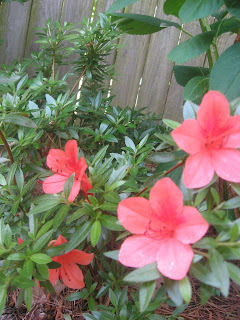 A bit overcast for this shot, but Toots has found great joy in plucking the purple chive blossoms from the pot.  I'm trying to coax tomatoes, peppers and broccoli out of the plot behind the pot, but still don't seem to have my soil mix right for the task.  I hope they take hold soon. 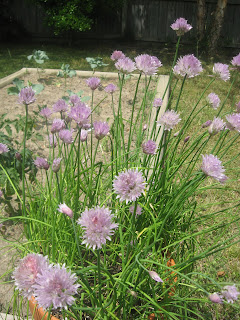 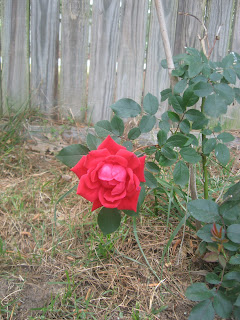 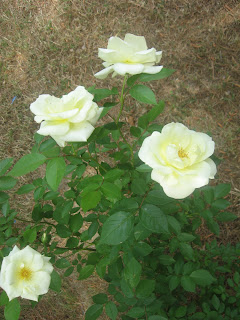 Roses red and cream in the backyard,  but again, my yellow roses out front and deep fuscia around the side of the house are struggling.   Please look past the pathetic grass on this side of the yard that mostly gets shade and loads of dropped pine needles.
The crazy rose vine at the street side of the house, with the brokedown wooden trellis had to be propped up with a new iron one.  Trying to correct the trellis problem or do anything else with this vining mass is just asking for injury.  I must shore myself up in spirit, long clothes and heavy gloves. Funnily, most of the blooms are facing the house, but I bet once those crazy vines grow a bit more over the iron trellis, we'll see a waterfall of these little snowy white happies. 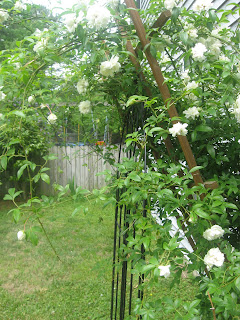 Three different peonies appeared to die off completely over the winter, but have returned and show a promise of peonies to come: 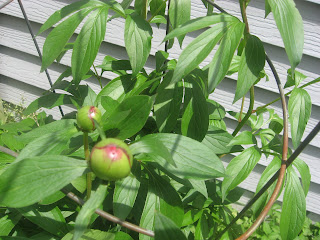 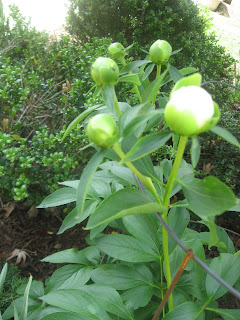 inside the back fence, next to the azalea pictured earlier.  I can't wait to see and smell these sweet rich beauties.  I think they are my favorite part of the bloom time.  So luxurious! 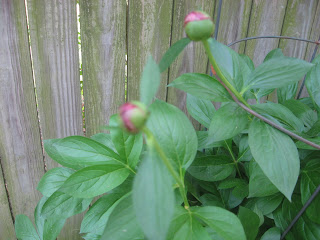 I planted twelve pots of this phlocking phlox around the front bushes and side of the house under the crazy rose vine.  Some don't look so good, others are doing alright, but I am rethinking my approach to the planting.  I spread them out, thinking they'd fill in eventually, but they seem pretty set keeping well away from each other.  I'll give them a little more time to see what happens and what I may need to do the remedy the spacey look.   The whole point of planting them was to avoid annual mulching around two thirds of the house, and, of course, to add a bit of color. 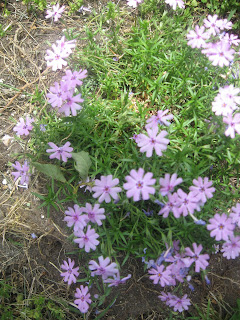 So while my vegetables are really struggling so far this year, my flowering bushes and vines are having a somewhat mixed result, but for the most part are really a joy to see and smell.  Time to go back out and weed around where my spinach should be....before the anticipated rain.
Hopefully it will be kinder to us on the coast than it has been to the folks up in the hills.  I wish the folks hit by the terrible storms in the midwest to Appalacia much good in the coming return to normalcy.
Posted by cath c at 7:37 AM