We got a late start to everything yesterday, which included forgetting to grab an actual camera rather than just the cellphones.  When we finally got rolling, we had to stop for sunglasses, because Toots has been begging for them since we all got our prescription glasses renewed a while back.  She felt left out, I guess, but now she's the coolest chick in the van. 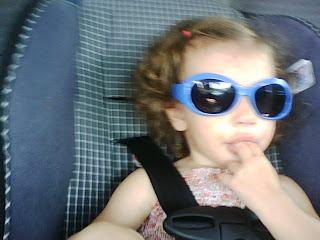 When we reached Grandview Beach in Hampton, VA, we joined friends on the neighborhood private beach area rather than going into the conservation area.  The walk was still quite long.  I did who-knows-what to my ankle earlier in the week, and then found the tidal pool ditch with the same foot.  Weird crunch in said ankle followed, as well as increased swelling.  But otherwise we had a lovely time at the beach.  Even Mr. Cynic, who was none too pleased about hanging out with his family in the bright sun, enjoyed himself in the end.
The boys found a clam in the dry area of the sand and moved it here, where it could dig back into the wet sand.

Lots of stumps littered the shoreline.  At first I wondered if they were remnants of an old pier, then realized they had to be parts of some old shoreline forest.
Captain Comic, of course gunned for the water as soon as we arrived.  I had to yell him back for sunscreen, but while I was trying to sunscreen Honey's back and Toots, while she dumped handfuls of sand all over the blanket we just spread out, he slapped two streaks on himself and ran back to the water, never to be within 15 yards of waterline after.
Last night, his back was on fire.  Still is.  Minimal white hand streaks are visible in the hot pink fire wall.  No amount of aloe will soothe it, and he won't let me put zinc oxide (diaper cream) on it.  So I said, okay, kiddo, then suffer, and no pool today.  He's fine with suffering the sting, but not with missing out on the pool's opening weekend.  He still won't let me put zinc on it.  No worries, I'll win when the rest of us head to the pool, seemingly without him.
Posted by cath c at 7:38 AM