The Writers' Retreat in the Outer Banks, NC

I don't know quite how to talk about my experience at the Writers' Retreat. It was rather life, or at least book changing. We got right to it, after a brief lunch on Thursday afternoon last week and settling in. We are six women children's authors all in a writing group together that has now officially been dubbed Tidewater Writers. We wrote on average, in silence, for nine hours a day. We all felt like if we were in our usual environments we would not have accomplished the things we did or maintained the focus for so long. We did only because five other women were doing the same thing. As for what I accomplished: I nitpick edited my way through three turns of the book, most specifically to get my verb tense consistent throughout the story. I surprised myself with a few new scenes where previously I had described situations. I figured out that I need to meld two characters. This both saddens and exhilarates me. I really love one character I am going to get rid of in the process, and his appearance really defines the family dynamic in the manuscript. Here are some pictures of where we stayed in a little town called Duck. 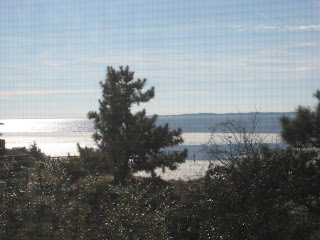 I took the above from the screened in deck almost as soon as I arrived. The drive was easy and made easier through conversation. I probably talked J's ear off out of necessity, as I anticipated the silence to follow. I'm a talker by nature, and just knowing there would be other adults to talk to who wanted quiet was going to kill me if i didn't get it out of my system. My apologies to J, if she sees this post. The water surface was frozen, hard to see from this shot. It was about the coldest weekend the Outer Banks had ever seen. Think about it: frozen salt water body.

A handful of hours later, after we'd been working, and I had fidgeted and moved around too much, battling my own distractions, I looked out the window to a beautiful golden sunset. 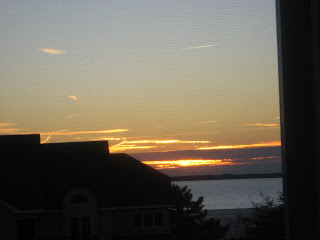 I watched it more than I wrote for a while. Below's picture is blurry, there was a lot less light, and a lot more color. Because of the darkness encroaching, my shutter stayed open too long and I have a shaky hand, so sorry about the blur. Amazing color, not amazing camera, you can see the ice patch better here in the lower quarter of the photo, blurry as it is. 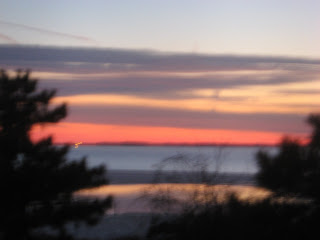 Each night we took turns making dinner. I was shamed by my cohorts. I like to think I am a good cook, but mine was way homier than the presentations by the other women. Even if my spaghetti sauce was homemade. After a couple of hours of work on Friday morning, I wasn't getting very far going crosseyed trying to edit and was fidgeting. I kept thinking about Toots and that I should be home. I saw J getting restless, too, so I approached her as quietly as possibly to see if she wanted to walk down to the water to clear our heads. So we bundled up and hopped the boardwalk over the dune to the peers and Currituck Sound. At least I think it was Currituck. I've looked on a couple of maps and a few sounds and a bay all seem to converge right about where we were staying, on the western shoreline. Again, all these white caps? Not moving, not gently rolling into the shore. Frozen. Solid. The wind was quite brutal. 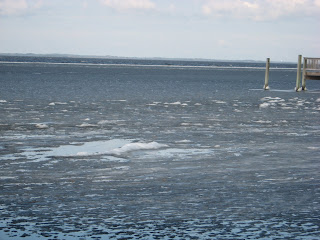 We wanted to walk out the long peer, but found it blocked by this: 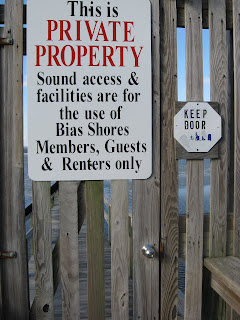 Even though we were renters. So here's a view from below the peer at about ten in the morning. 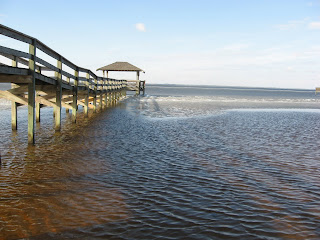 We didn't stay out for long, the wind was really taking our breath away. I heard some form of wildlife rustling on the dune in the grasses and brush, but didn't catch sight of it. Below is the view of our house from the boardwalk. It was huge. It had a pool, closed, and a hot tub. The hot tub became a vital part of our retreat and writing process. We gabbed about writing bumps and curves, drank wine, and soaked, while the water steamed up into the cold cold night around our heads, and up to where the stars shone brightly. 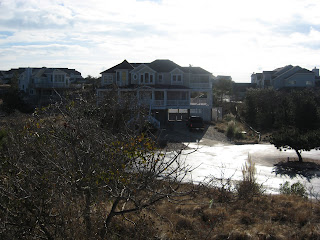 Saturday, J and I decided, as cold as it was, there was no sense in our coming all the way to the ocean, mere yards away across the main road, and not see it. If you've been reading my blog at least since this summer, you know by now my particular affinity for the ocean and beach. We drove down, parked and walked over the dune around four in the afternoon. 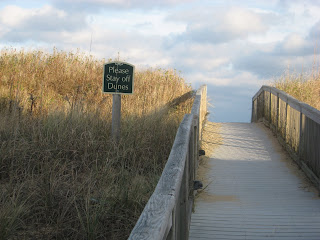 If we thought the wind was cold the day before, it absolutely bore through us on the way up the dune. Below is the view from the crest of the dune as the wind began to tear through my left ear. 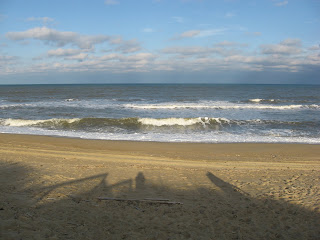 We walked southward down the shore with the wind at our backs, but still seriously braced against the cold. My Red Sox cap was the wrong hat for the job. I found tons of cool shells and even pieces of bone of small animals, washed ashore. The shells were bigger than any you can find in the summertime at Virginia Beach or Buckroe, my current usual haunts. I've been collecting beach detris since I was a little girl growing up on Long Island Sound, and all the beaches my parents trotted us to all up and down the East Coast growing up, and any beach I've been on since. I picked up a nice couple of pieces of driftwood on Saturday, along with a pocketful of shells, two whole crab carcasses (two types) and the jawbone of something, I still don't know what, but it still has teeth!
I soon realized we really needed to turn around if we weren't going to freeze to death on the way back to the boardwalk by the car. J agreed and I'll tell you, my mother's old expression 'cold as a witch's titty' does not even come close to the wind that whipped our faces. The seagulls below stood shivering away from the water's edge until I pulled out my camera and approached them.
They gave me some serious WTF expressions as they headed toward the water to get away from me. 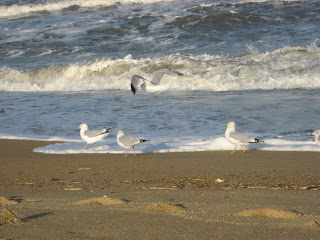 By the time we jumped back into J's car, I knew my ears were in serious trouble. I looked in the visor mirror and they were stark white. That is not a good sign. They continued to tingle and hurt two days later, after I'd been warm inside even back home for twenty-four hours.
By the look of these pictures, it seems I spent a lot of time gazing at sky and sea, but really that was a brief respite. The main thing I did all weekend was write. Well, even then, mostly edit, but it was much needed and not something I've been able to stick it out and do with all the home interruptions and easy distractions. I feel refreshed and exhausted. refreshed from all the sleep and hot tub that I don't get at home, ever. Mentally exhausted because I finetooth combed my way through my whole book, and wrote additional scenes. I can't wait for next year's retreat!
I am posting this a few days later than I wanted because I came home to a sick cat, and paying attention to family needs. We're still waiting on test results to find out what is going on with Babette, and I am absolutely drowning under laundry duty, among the usual mayhem.
Posted by cath c at 7:24 AM