I have mentioned before that my son with asperger's draws comics for hours at a stretch, usually on individual pieces of paper that clutter his room and the rest of the house.  There is one project he has been working on rather consistently, not torn the pages out of, and which he generally calls his Graphic Novel. Yesterday afternoon, Captain Comic came running laughing, clutching it very dearly to his chest and exclaimed through his giggles, "Want to see a really funny joke I just wrote in my comic?"


Of course I hesitated a moment because I was in the middle of something else, and his sense of urgency is directly proportional to him versus anything else that may possibly be going on around him.  So when he distinctly let me know he was displeased at the prospect of waiting to show me he greatest and most recent creation, I gave him my attention.  Whereupon, he proudly displayed and read aloud through his own laughter this page, highlighting the joke in the block on the middle right of the page: 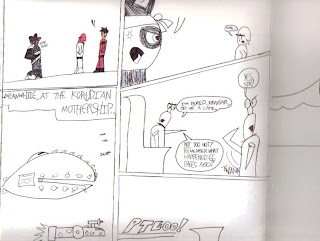 Because my scanner is less than desirable, here is the dialogue:
Boss Alien in chair:  I'm Bored, Kraygar, get me a latte. (bottom balloon) Not too hot!  Remember what happened 66 pages ago?
Subordinate Alien salutes with a twang: Yes, Sir!
I love his sense of the fourth wall.  I wonder if Bertolt Brecht was thinking like Captain Comic when he innovated the technique in his plays?  I wonder if Captain Comic is familiar with the Greek Chorus device of ancient plays a la Plato?  I wonder how much he has seen Groucho Marx.
I also love his sound effects.  Twang!  PTEOO!  Very effective.
Whatever can make this kid crack himself up this much works for me.  The fact that he is consistently working on something and not discarding multiple versions of it because it wasn't drawn exactly right is miraculous.
Toots is beginning to show her artistic tendencies as well.  She prefers alternative canvasses.  Witness:
"Yook, Mommy, Yook!  I wite my name!" 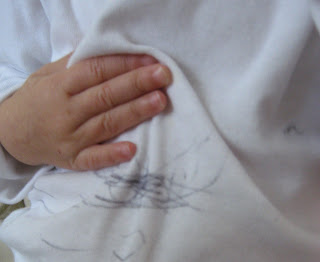