My friend CW loves Basenji dogs so much that she fosters puppies regularly. She has a houseful right now and wanted us to come by and socialize them. Originally I gave a pretty hard no, because I knew I wouldn't be able to be around puppies and walk away without one. 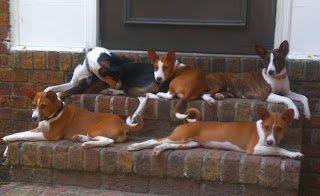 Of course, I came around and we visited. The one in the upper left corner is one of CW's adult Basenjis. The rest are the foster puppies. I fell in love with the brindle, named Amber (upper right corner), but I was good and did not bring her home. Just so you know, as I write this, my heart is totally breaking about having left her there instead of coming home with us. Another friend of mine has already adopted one of the tawnies. She's a big Basenji lover, too.

Someone else has claimed another one of the puppies, but wanted to be sure she was gentle with little ones, and that's where we come in. Toots and this shyer of the pups were wonderful together. In fact all the puppies really gravitated to Toots because she is just about their size. Captain Comic noticed and commented about it.

Captain Comic loves dogs and researching about different breeds. He was really looking forward to going today. He was especially interested in hearing the barkless dog's yodel.

Mr. Cynic didn't say much, but I just know he was totally squeee-ing on the inside.

Here's a bit of our adventures in Basenji Central: 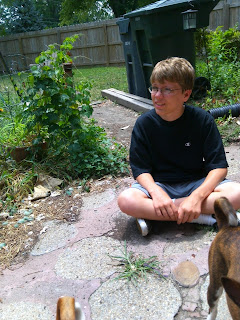 Here's Captain Comic waiting for a puppy attack. He wanted it so badly. But Toots got it instead. Sorry, I was fending off puppies from her and couldn't take a photo. 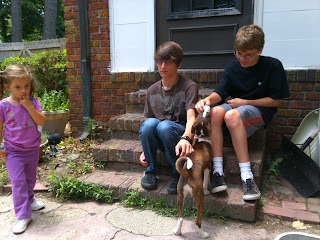 This is Amber, with whom I fell in love.
She was pretty keen on all the kids, too. 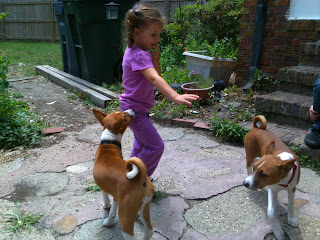 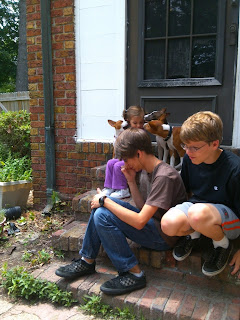 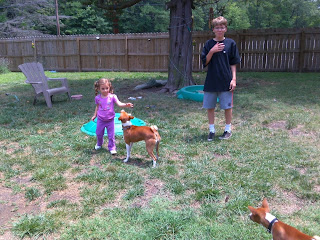 Captain Comic was so excited to make the puppies come running. 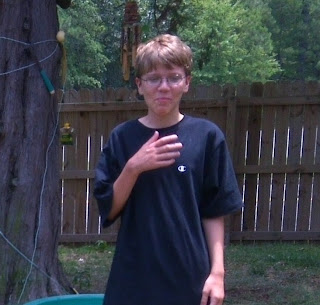 Just look at that giggle face. He's holding it in so hard. 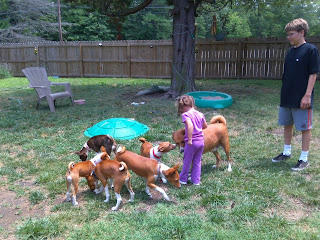 Puppy love! And CW's adults, too.
The big one is a Basenji mix, all the others are Basenji through and through. 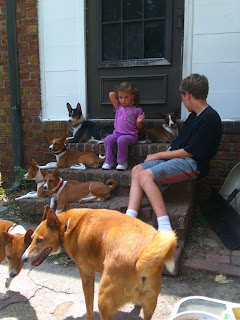 Apologies for the dog butt. Toots and Captain Comic were in seventh heaven here. 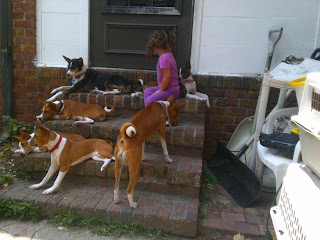 See how Amber just seems to belong to us already? NO, wait, stop that!
Breathe, Cath, leave the puppy be.
If you love something set it free....
Meanwhile, at home, not long before we went visiting the pups, a certain troublesome terrier raised a bit of hell. I heard the dog door through the garage, and immediately, half a house away, was blasted with a stink so bad... I never smelled anything quite so odiferous in my life. It was the stink of a thousand rotting corpses. It was hideous beyond belief. Captain Comic wrapped his shirt around his face as we tried to chase her out of the house. Lucy was clearly very proud, happy and excited about whatever she had just rolled in and apparently ate. We chased her out, we locked all pet door access to the house. She managed to get back in as we tried to get shampoo and green dog treats galore out to her. We chased her out again, grabbed her and hosed and shampooed her down. The treats didn't help her lethal breath. I went into the fridge for some cilantro, anything full of chlorophyll to fight the stink of rotting zombie off of her breath. 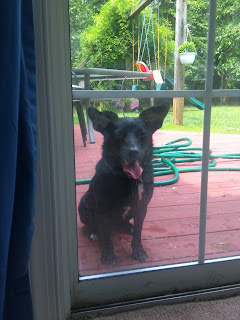 The stinker after we tortured her with bath and breath fresheners.
She is clearly still stoked about whatever she attacked and possibly devoured.