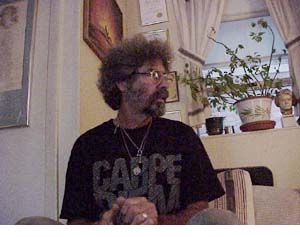 image source: www.artseditor.com 1999
Jack Powers is a Boston Institution. He was the founder of the long running poetry venue, Stone Soup Poets. Unfortunately, at this time, I can’t find an obituary to link to his name, because I am not going to write one here for him. When I find one, I will attach it. He passed away yesterday.
I am just going to share with you the ways that Jack personally influenced me. I would be lying if I said anything of this man that did not reflect how he influenced literally every aspect of my life. I absolutely would not be who I am today, personally, professionally as a writer and as an educator if I had not met him.


September 1989, not even completely fresh out of college, as I was still working on my thesis, I arrived in Boston, a 23 year old intent on making it as a poet and fiction writer. I spent a lot of my Western, MA college years in Boston but had not sought out the arts community until I arrived and unpacked everything I owned into a small apartment on the frat block of Beacon Street near Kenmore Square. In my first week there, I bought a Boston Globe and a Phoenix, and scoured the Events section for poetry venues. One called Stone Soup Poets called to me from the newsprint pages of both. The following Monday evening, I ventured across the river into Central Square and down a side street. Other than walking into a temp agency, this was really the first time I navigated my way around Boston and Cambridge and the T completely on my own. It felt epic. I felt as though I were the young hero of a novel about to be written, and it was my life. Little did I know that walking into Charlie’s Tap, an unassuming backstreet pub, and up its back stairs into the closed restaurant night would make me.


I was shy then, nervous, sitting at a corner table out of the way by the bathrooms, wondering if I was at the right place, because I was the first to arrive. Slowly the room filled with an odd assortment of people, young, old, gruff, quiet, smelly, clean and passionate. It seemed every facet of the character of this metropolis walked up the stairs into that small, smoky, covered in paintings of jazz musicians space. I wrote them down in my little notebook as I kept to myself. Eventually, a towering, salt and pepper haired man blew up the stairs and took command of the room and set up the microphone. I watched as everyone approached him, wrote their name in his book for the open mic, and chatted him up. He graciously, if somewhat distractedly paid attention to each of them with his frenetic, barely containable energy. He was obviously the man in charge. But also, his spirit was huge and filled the room. Jack Powers.


Months later, after attending the venue weekly, I finally worked up the nerve to walk into his orbit and sign up to read one short poem. I was in a sweat. My leg shook like an earthquake long before he called my name from the sheet. He still didn’t have any idea who I was as far as I knew. I barely made it through that poem without breaking the mic stand because of my right leg’s violent shaking.


The next week, when he read the list of upcoming dates and features, I heard my name cross his lips for the second time. I had no idea, except that a little bird name Gary Hicks had kind of taken me under his wing and wanted me to spread mine, so he convinced Jack to give this little nervous unknown a featured reading. The rest is a smidge of poetic history around Boston in the first half of the 90s before I started having kids. Because of Jack, I eventually became comfortable and confident reading my poetry in front of an audience of fellow poets. Because of Jack, I got a reading at the Cambridge Public Library. Because of Jack, I began to have a bit of public recognition. People on the street, in stores, on the T walked up, said “Excuse me, aren’t you that poet I saw read at [such and such venue]? I love your work!”


Because of Jack Powers and Stone Soup Poets I met my closest circle of friends for many years in Boston. I met still one of my dearest friends, Joe, who prefers a bit of anonymity. I met my now ex-husband, and father of Mr. Cynic and Captain Comic. We had a long, albeit half-life relationship. I met and was mentored by the poets Wally Butts, Peter Kidd and Bill Kemmett. Poets Lawrence Ferlinghetti, Ray McNiece, Billy Barnum and Brother Blue, just to give a range; songwriters Jan Luby, Jim Infantino, Don White, again, a range all influenced me greatly, including storyteller Raelinda Woad. Jenny Harrison from Australia amazed me more than most, she wrote of my life before I lived it as a mother, and I felt that when I heard her read.


At some point I found myself as part of an inner circle around Stone Soup that met periodically at Jack’s little apartment on Joy Street in Beacon Hill. Lots of laughter and deep conversations occurred there, running the gamut from politics and good works, to beauty, life, the nature of poetry, and always the rich well of stories from Jack and all his years around Boston. From that, I babysat his two boys a number of times.


I tired of temping early on in 1990, and amazingly, and I’m not exactly certain how this came about, but Jack Powers wrote me a letter of recommendation to begin working for the Boston Department of Education as a substitute. He gave a way in to the world of education, I always felt drawn to, yet simultaneously was unsure I could do. I remember distinctly all these years later, what a glowing recommendation it was, even though I felt we didn’t know each other well. He was much more confident in me than I was in myself. “She thinks well on her feet and has a good eye for the Big Picture.” I still remember that line from the letter and it is what gives me my confidence as I walk into every new situation. Professionally, I basically have done something in education ever since, if you just ignore my 3.5 years as a law firm receptionist.


I have felt blessed in my life to feel that I have two professional raison d’etres: writing and education. In writing, I never would have found my voice without the influence of Jack Powers and the faith he had in me. I never would have built the confidence I have in my writing if I had not stood by his holding me up in front of an audience for the first time, completely on faith and the continued support he gave me after. I never would have found my second raison d’etre, my career in education, such as it has been over the past 20ish years, if he had not suggested it and written that letter of recommendation.


And more importantly than both of those, I would not have my boys, my heart, if Jack had not created Stone Soup out of thin air, had not that place existed in that upstairs smoky back room above a bar where I first met the father of my boys.


I am terribly remiss in that I did not maintain contact with him as I moved on in my life after having the boys and moving into other directions and places. But when I heard of his passing this morning via a message from the boys’ father, I immediately broke into tears as the memories of all he did for me, as well as his laughter and energy came flooding into me. I honestly would not be who I am today in all aspects of my life, if not for Jack.


Jack Powers left many legacies, not just for me, in his wake when he left this earthly world yesterday. The reason for this is the passionate heart of a man who continually put the success of others before himself, providing at the very least, a place for new voices in Poetry and the Arts of Boston to bloom and be heard.


May he truly rest in Peace. His work here is done. But I bet he doesn’t think so. 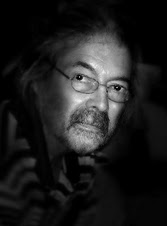